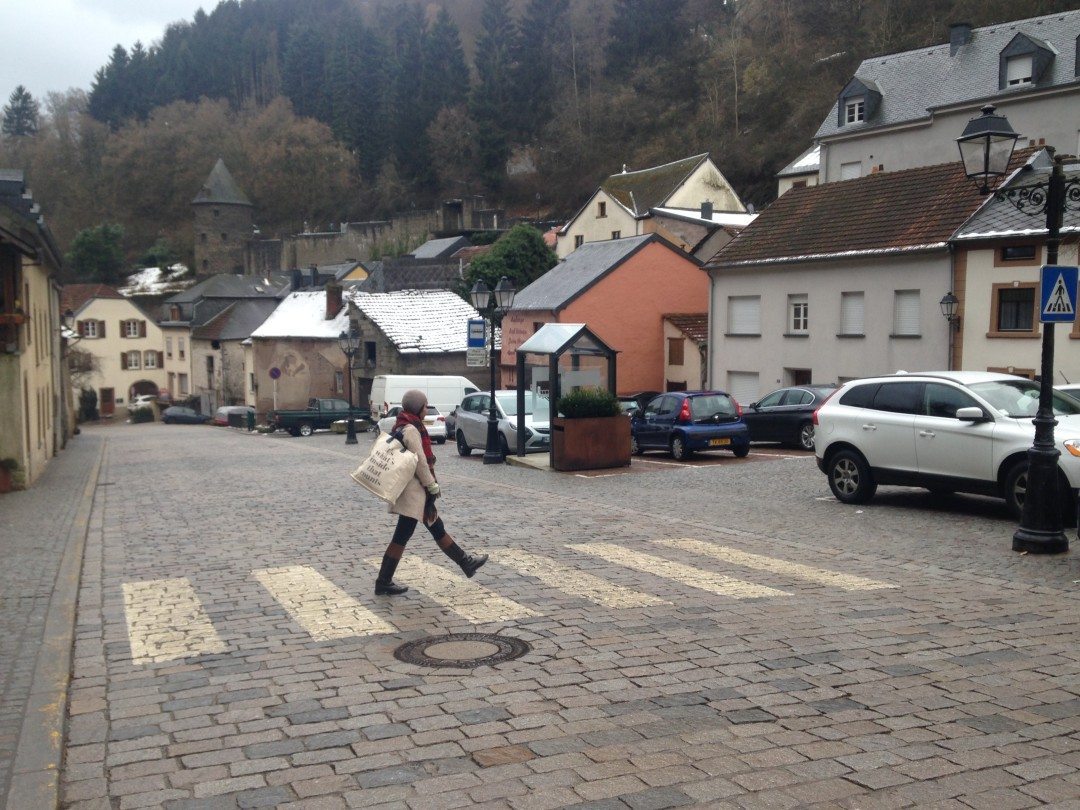 As I am doing my best to keep my journey on going, I said yes to my dear (another) Indonesian friend whose the dad is coincidentally my dad’s colleague in the University, when she asked about going to Luxembourg along with her friends. Her name is Retno, I call her Nok….
It’s just like a good sign, that this invitation came just in time when I asked her to escape somewhere in the weekend and pointed Luxembour especially as it’s not extreme far. She was like, aha I’ve plan to go to Luxembourg this weekend. I was like, uhm okay I did not really mean this weekend, it’s such a short notice and I am not a big fan of spontaneous thing like that. I am a well organized person, and I like to have control on things. So of course i did not say yes right away, I had to think, but then Hell yea, chance doesnt always come twice. Therefore, suddenly there I was on the train chatting.
We took the cheapest train via Germany, the ride duration in total was 7 hours (with 5 connection trains), exhausting! But this happy gank always keeps me laughing and happy. The ambience is always positive whenever surrounded by them. For me I had no problem waiting changing running to catch the train as long as I am with them.
We arrived at the Hostel on Saturday Feb 7th, at 16.00. What a looong journey, but the scenery passed were all beutiful, so not much to complaain about, only butt was a little numb 😛
One lesson learned, always bring backpack for this kind of journey!! Dont complicate yourself…
I did bring my huge canvas Tommy Care hand bag because I had to go to the work and I didnt want
to carry my unmatching eye catchy ugly backpack.
Frankly speaking it was not that bad because we were mostly on the vehicle, but in the second day we had to bring the luggage to the Vianden castle. This destination has to be reached by going up the hill which was fairly slippery caused of the recent snow. Thus, I had to focus on my step than my bag, guessing the guys feel pity of me and they decided carrying my bag. How dear! But i dont like to give my burden to other people, so next time backpack FTW.
Anyway Luxembourg is a small fancy wealthy country. It’s one of the tax haven countries along with Switzerland etc. The locals seem secure, financially and certainly safety. They are bunch of happy people in which they dont show and perhaps they dont know because they have had this kind of life ever since they were born. Main languange is Luxembourger (french+german+english), because they ade mixed of that culture and fraction of those countries altogether. However, aside of the tax haven country, it still has euro as currecny (unlike Switzerland), hence the normal price in food, baversges and acommodation. Comparing to the trip expense and flexibikity during Switzerland journey that I made in November, is pretty huge different. Around 150eur max, I spent.. It was worth it.
The trip with this people is always memorable. We didnt do very much due to time limitation we had, but I proved that the company you are with determines how valuable your journey is. And to get along with travel buddy is not simple because you have to be with them for 24hrs and sometimes when one does not want to compromise, fight and arguing could not be avoided. So when you find a compatible travel buddies, seize it.
We continued the first day by going to the area nearby hostel which happened to be old town. We went to so-called the balcony of Europe. Very beautiful. It’s like coming back to the 50s with such building. One thing I notice was, when the light was switched on, all town were covered in yellow lamps. I assumed, it must be governmant policy to have yellow lamp, because it really gives artistic and gothic feeling to the city. Unlike white color who looked modern and dashing. Furthermore, we had dinner at the Restaurant in old town city centre called La Boucherie. Luxembourg does not really have a typical culinary. It is mixed between German and French therefore they have all kind of French-styled appetizer including escargot and Rabbit meat. I was interested with Rabbit meat but I did not want to order for myself because I would feel guilty. So, I just tried one bite from my friend. It tastes uhm special… And it’s served cold, yuck! Cold meat is not my favorite thing to eat.
Let’s say, the dinner after all was great, nice food, coold place, and again, fun company 🙂
Below are frozen memories we had. 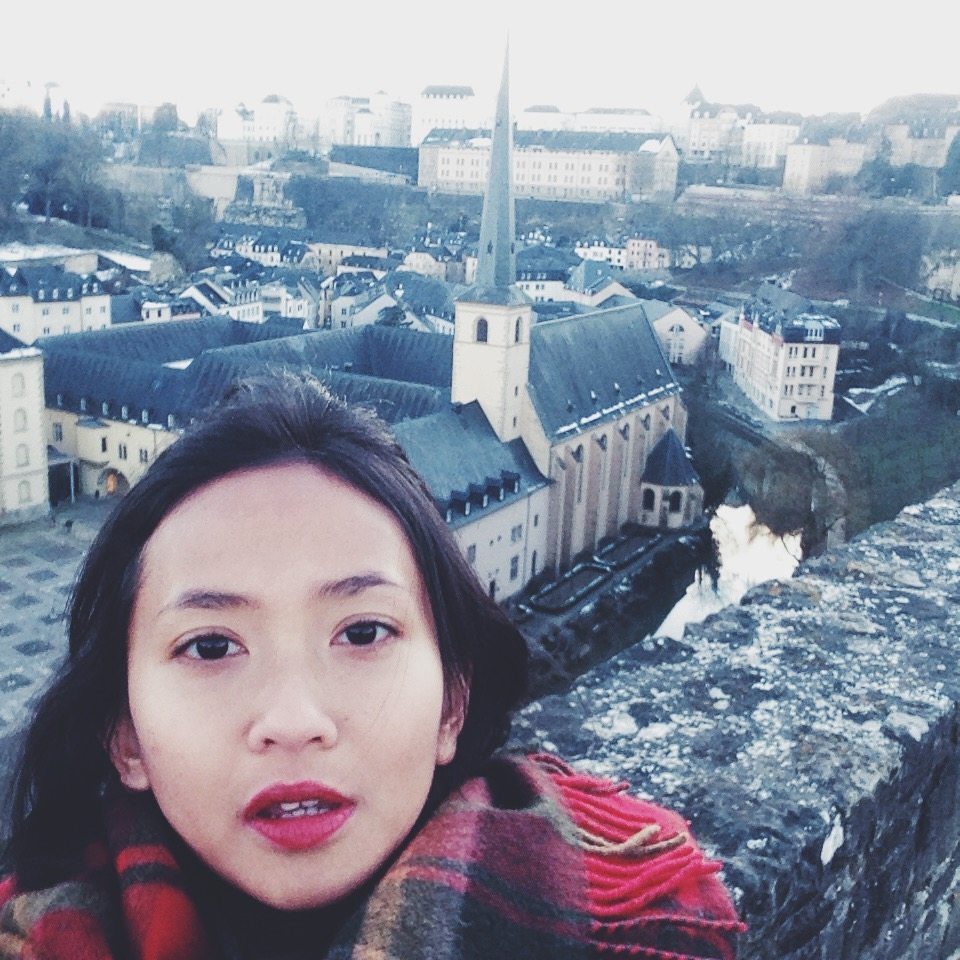 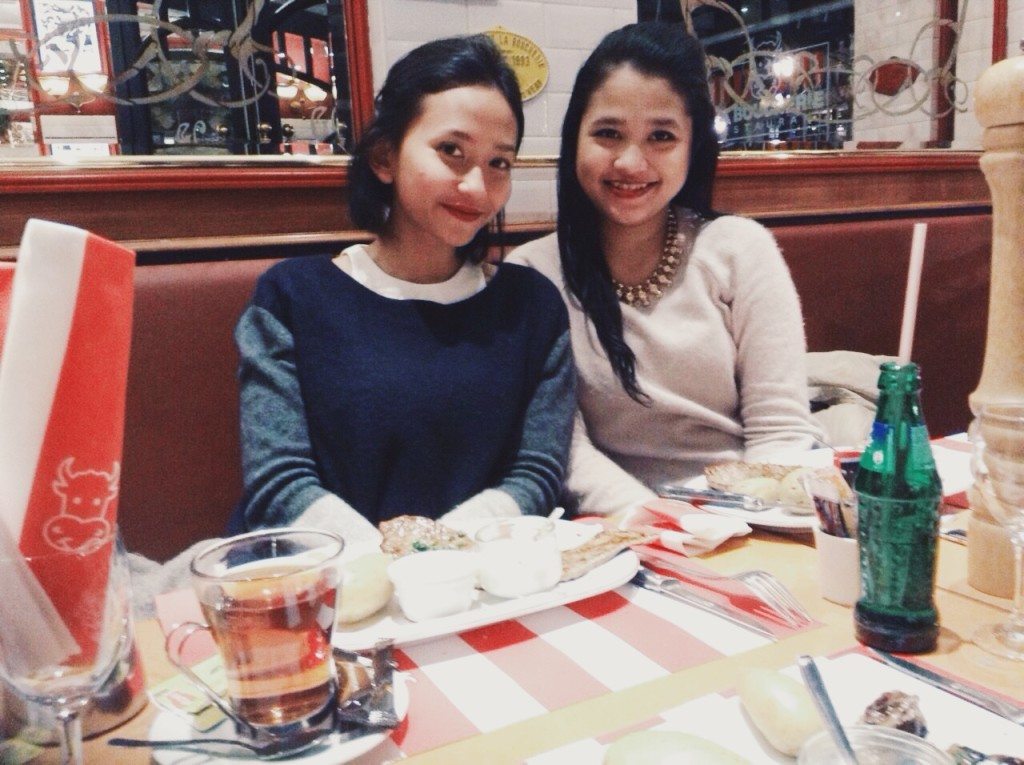 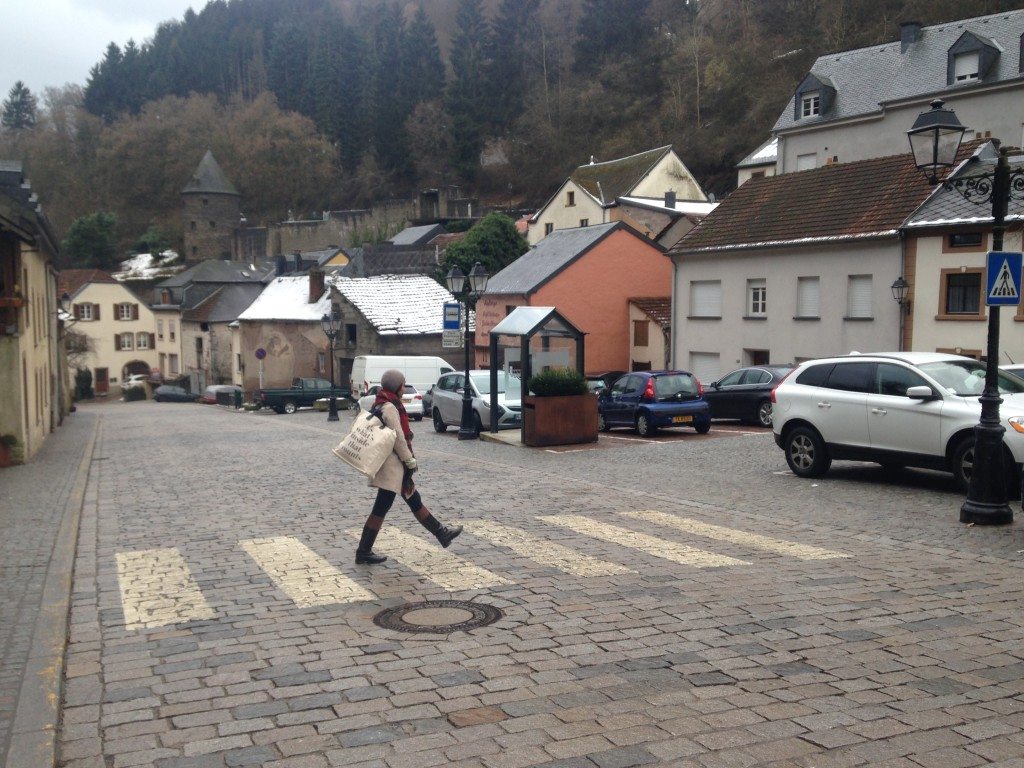 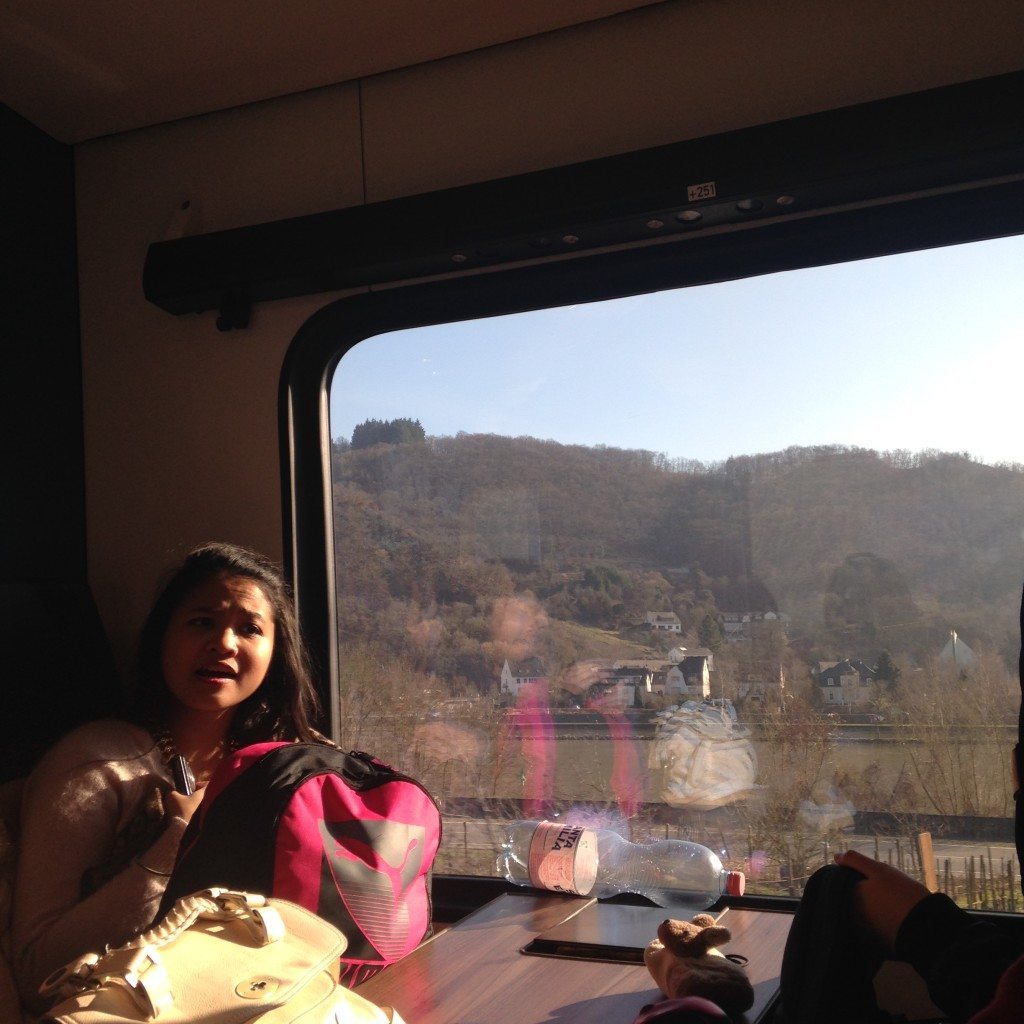 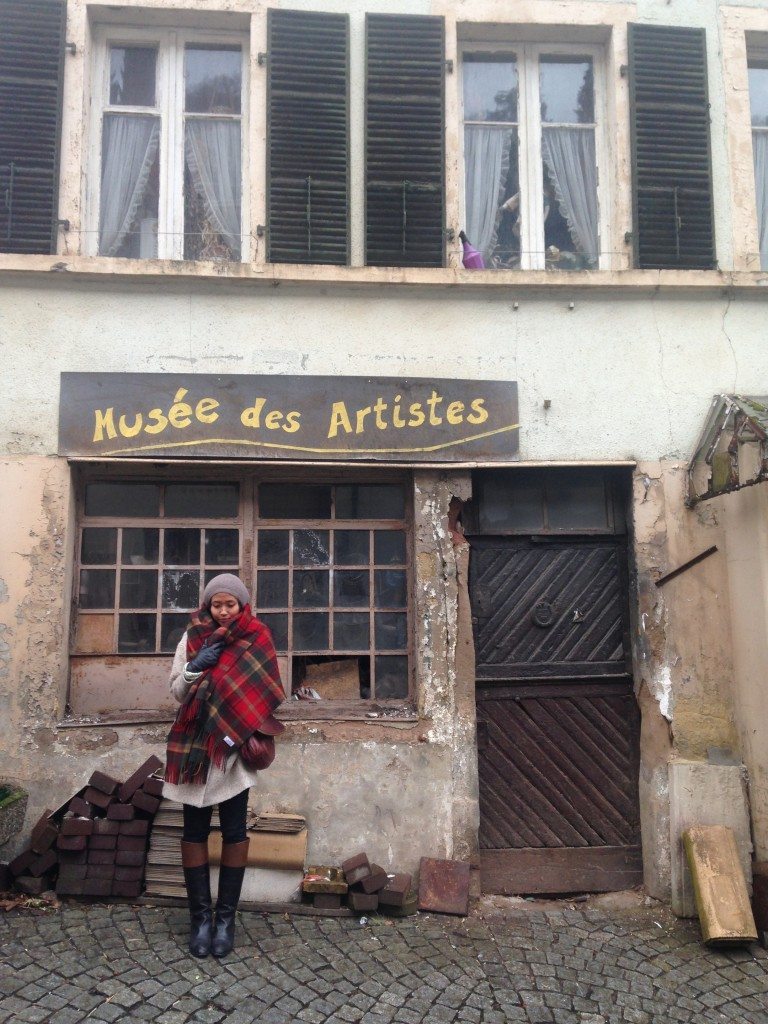 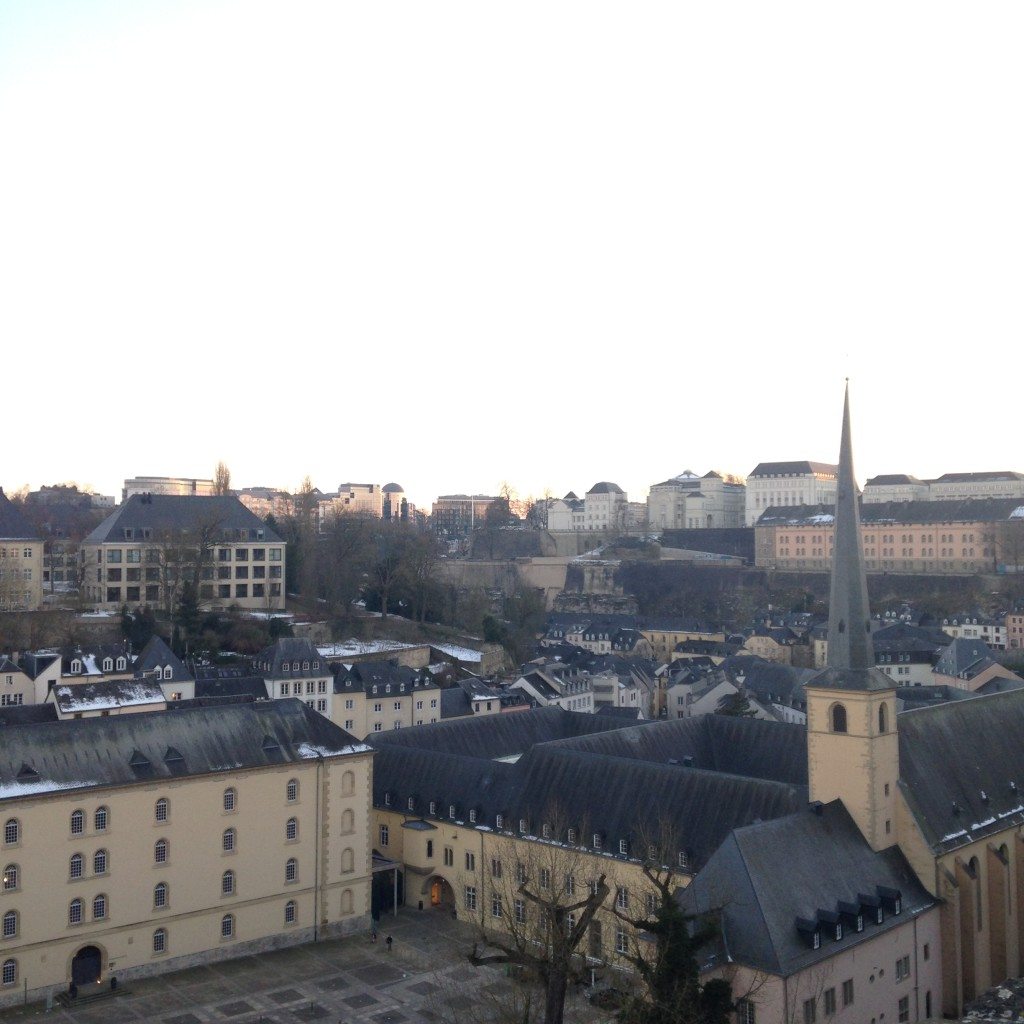