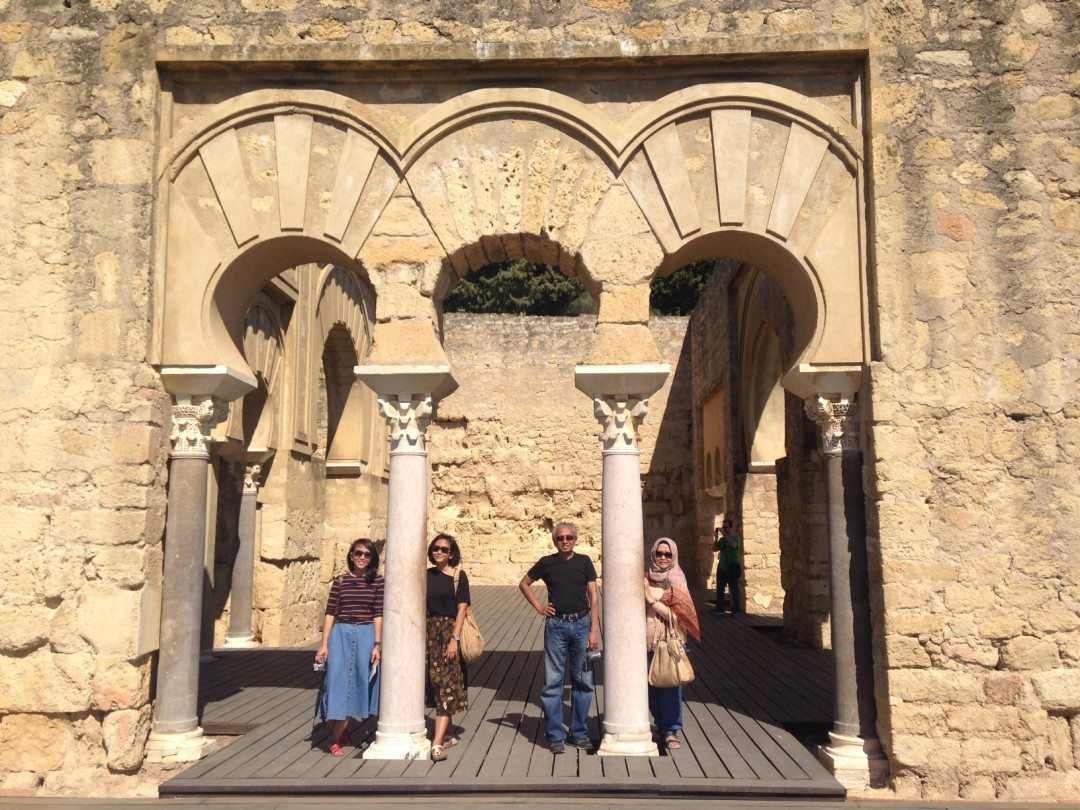 I returned from Andalusia today with a big smile in my face, looking back to the experiences I had been through. I am still overwhelmed by all the Muslim history that actually was forcedly demolished and not so many people learnt. As Yasin put it ‘if you imagine europe continent as whole, andalusia was the only light can be seen, other countries were in the darkness”

I am glad that I am once again able to scratch what has been on my list for so long, visit Andalusia. This time is even more special because I could bring along my parents, plus my  sister number 2. Little did I know back then that I could be able to trail Muslim history in Andalusia with my family member although for so long I have been dreaming to take my parents around, but I would not think it would be in this Pilgrim trip. Pilgrim because it is a journey to a holy place, where a lot of Islam milestone history written. For once they were so much ahead and ruled the world, through Europe. Yes.. Europe. Not so many are aware because Islam is merely associated with Middle East or Arab country. I am lucky that my dad is a very curious man with many knowledge who seems to know everything and try to find answers to his questions especially concerning our religion. I first acknowledges about  the story of Andalusia from him. It makes me want to go to Andalusia so badly. I want to witness with my own eyes, the magical leftovers building from the glory of Islam more than 7 centuries ago. Gratefully, my parents are able to come a long. I am very happy to experience this together with them.

I booked the ticket months before the departure days. I managed to buy the ticket from Easy Jet for 150eur/ person, which is considered as a  normal rate. We decided to stay in Andalusia for a week. A week is perfect because there are a lot of things we wanted to see and we would move from on city to another. Yet, a week is enough to make my parents not to have to jump here and there too much. I wanted them to still be able to enjoy the visit without being rushed with time constrains. After ticket booking, I tried to build the itinerary myself until I got recommended a halal tourist agency. This halal tourist called Eren tour, it is guided by a local who is fellow Muslim and what makes it special is that he studies the history of Islam in Andalusia area. They guy is named Yasin. The money we payed were worthwhile, since visiting alone without clear story in mind and with someone who could explain every little details on what were you looking at, were very much different. Moreover, the accommodation was convenient with Yasin’s car.

Day 1 & Day 2- SEVILLA
We arrived at 9.30 om in Sevilla after 2.55 hours flight went straight to our airbnb. Tips: If you know you would arrive on Saturday night to anticipate some supplies (because a lot of stores closed on Saturday and Sunday). We brought rices and snacks from the Netherlands.  The next day on Sunday, we had breakfast and utilize our supplies, because as we assumed, all the stores were closed. We started the day at around 10.00. I was telling myself that no matter what happened, we needed to just enjoy the ride. Because the family time was more important. As a lot of places closed on Sunday, we just walked through the neighborhood and went to the city. The weather was perfect, 23 degrees, we went along the street with the help of the map then we continued with Sightseeing Bus. It was my first time going with hop on hop off bus, pretty remarkable 😀

Day 3 – SEVILLA- CORDOBA
This is long awaited day. We would officially start the Muslim trail journey with Yasin, the man of Eren Tour. Yasin picked us up in the big square nearby our place called Plaza del Salvador. First thing Yasin asked was if we already did went to Alcazar and Plaza de Spana. We were looking at each other, and said ‘we think so, but we did not stop‘. He said hysterically, “No, you have to go inside to have more insights“. Thus we ended up going there first before we drove to Cordoba. They said, Alcazar is the Chinese version of Alhambra. That is pretty funny. It indeed looks exactly like Alhambra, only much smaller. So many arabic carving on the walls, that I am proud of. I am amazed by the famous beauty of Andalusia in which actually created and built by muslim in the 7th century.
In the afternoon, I started feeling sick and weak since the morning, and got worse in the evening. Could not really enjoy the journey anymore, although I was still excited but my body turned exhausted really quickly. At night I decided to just be dropped home and stayed to get some rests hoping the next day I could start fresh.

I woke up feeling much better after being sick for the past days. I think my body tumbled waiting for the right timing (read: when my parents and my sister around, so that they can take care of me) *winkwink* After all, I am the baby in the family. We left the memories in Cordoba and moved on to Madina Azzahra before going to Granada. 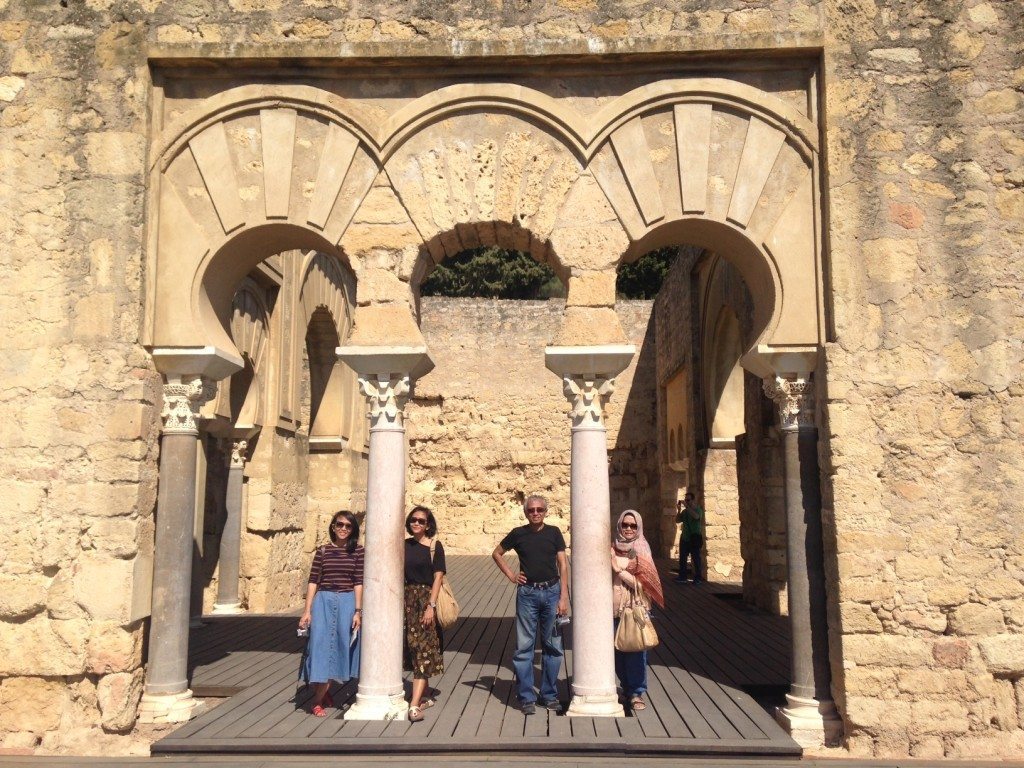 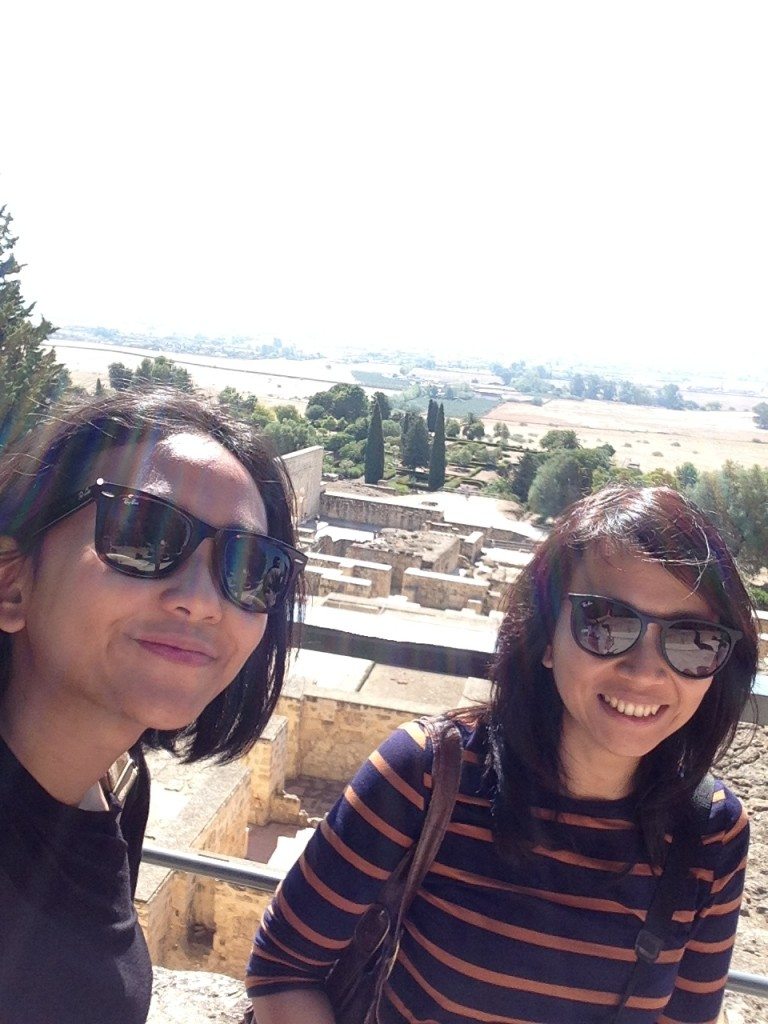 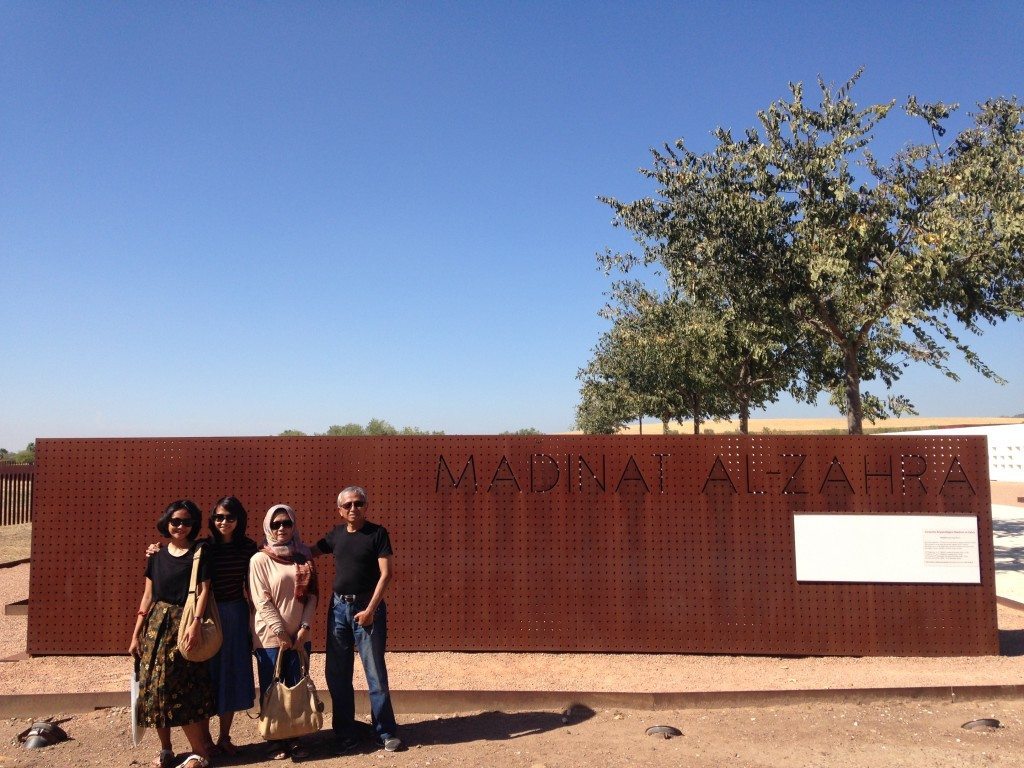 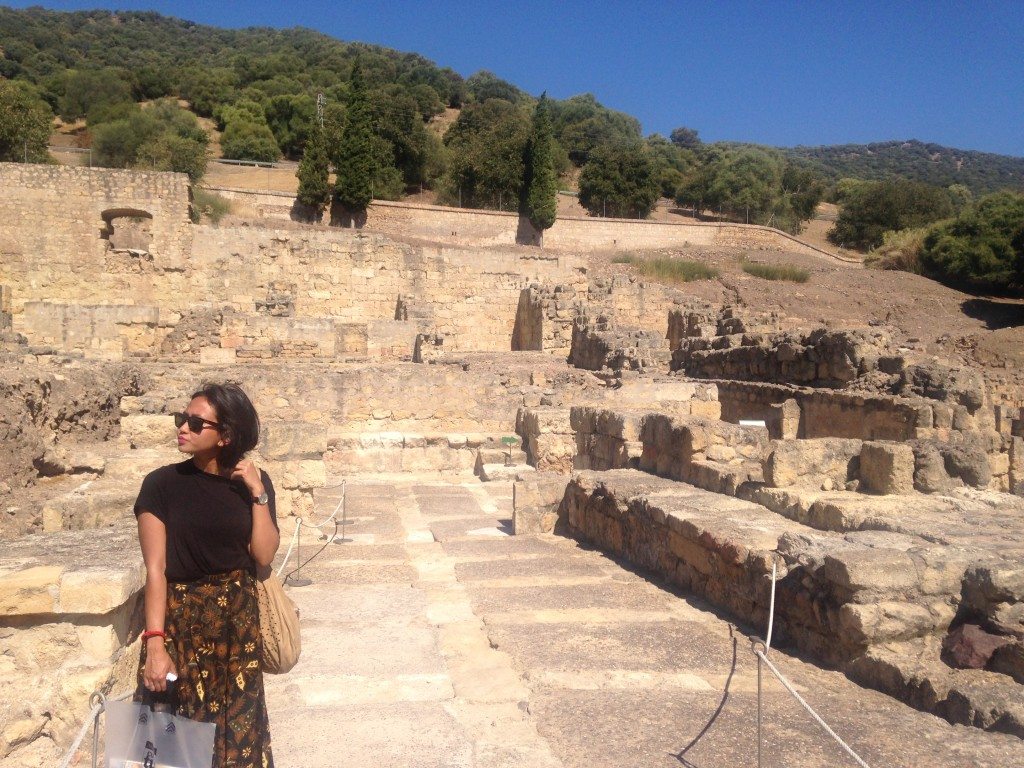 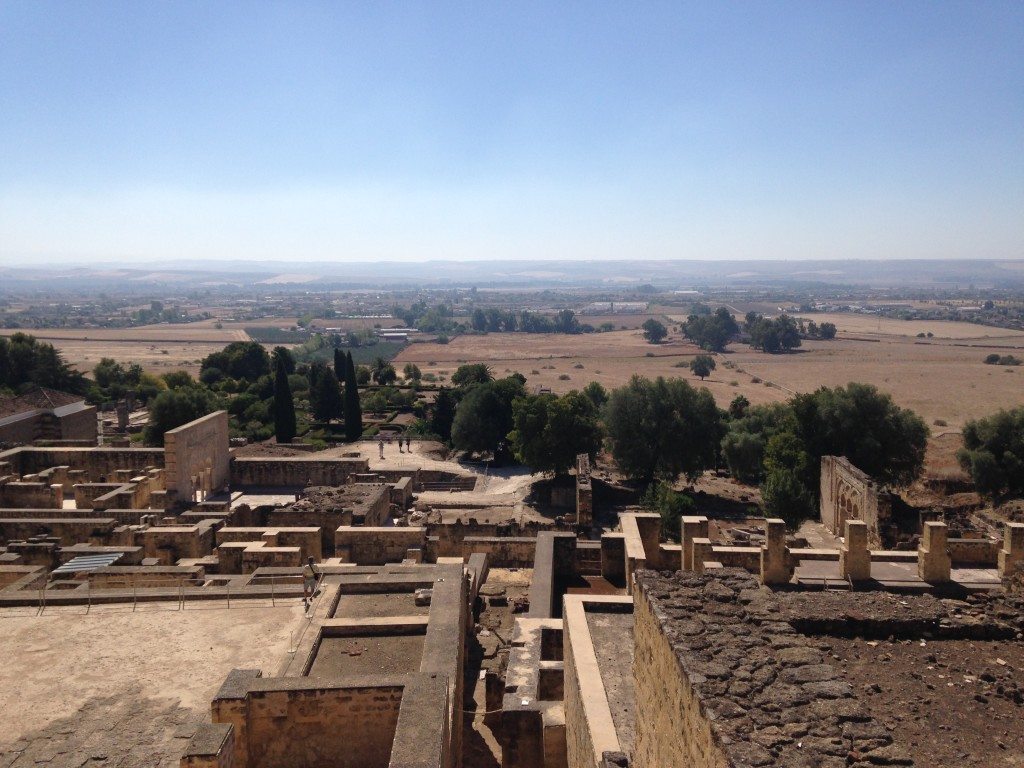 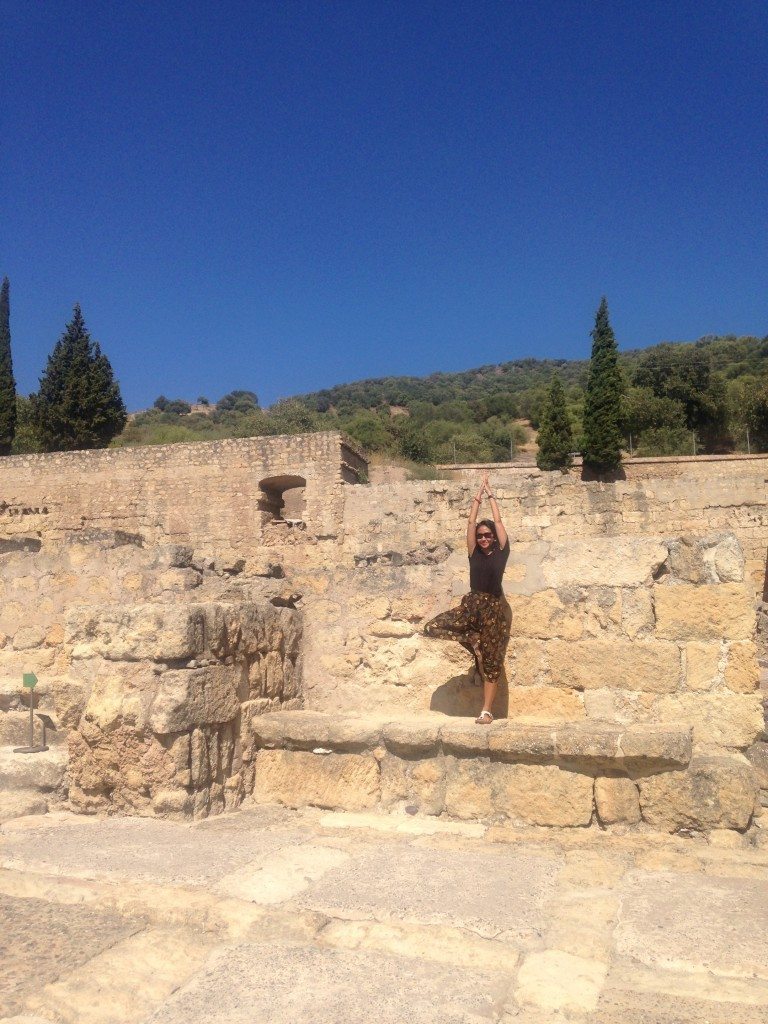 We arrived in Granada in the afternoon and went straight to the airbnb. Our stay this time was pretty remarkable and authentic, the owner said the place was built 300 years ago. It’s petite and looks super old indeed, my sister and I got a bit of bed bug bites LOL, fortunately she got her allergic paste so the feeling could have been worse.

By far, this is my favorite city, it’s like no others. It’s located in the mountain area, hence it’s hilly. The road is made of stones, the street is super small so it requires somebody’s expertise to drive there. And coincidentally, Granada is where Yasin lives, so he’s trained for it really well.
Unlike all of us, my mom had some difficulties climbing up, but all paid off every time she saw some places to shop. There was this Maroccon bazar alley that got her all excited. After arriving, we took a rest for couple of hours and then went out to the city center and caught some sunsets from Albayzin ( the village where we stay ) to look over Alhambra with its redness with the spot light from the sunset. 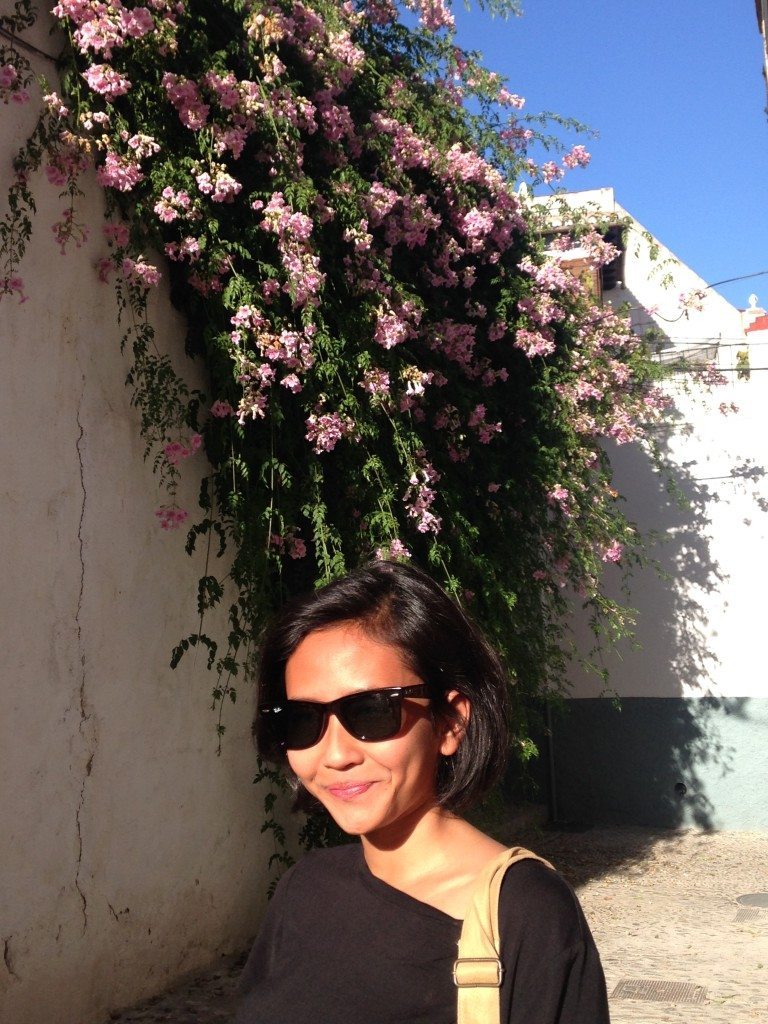 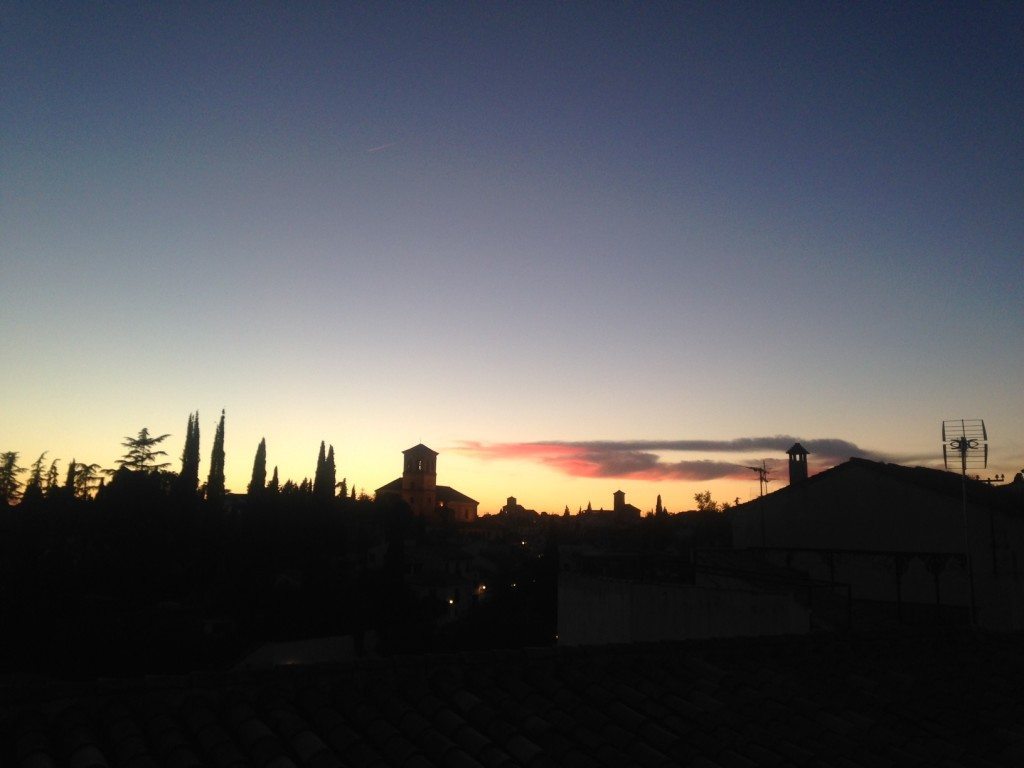 Day 5 – Granada (Alhambra)
Yasin arranged a guide in Alhambra because it was not allowed to bring guide from outside. Our guide named Tariq, he’s as old as my dad. I can see a fatherly figure on him. He explained the story properly. Alhambra is a royal house (not palace), total is 7km and without even realizing it, my mom made it from the beginning till the end. The power of mind and not knowing!

Alhambra (/ælˈhæmbrə/; Spanish: [aˈlambɾa]; Arabic: الْحَمْرَاء‎, [ʔælħæmˈɾˠɑːʔ], Al-Ḥamrā’, lit. “the red one”),[a] the complete form of which was Calat Alhamra,[b] is a palace and fortress complex located in Granada, Andalusia, Spain. It was originally constructed as a small fortress in 889 and then largely ignored until its ruins were renovated and rebuilt in the mid-11th century by the Moorish emir Mohammed ben Al-Ahmar of the Emirate of Granada, who built its current palace and walls. It was converted into a royal palace in 1333 by Yusuf I, Sultan of Granada.[1]
Alhambra’s Islamic palaces, as we know them today, were built for the last Muslim emirs in Spain and the court of the Nasrid dynasty. The decoration consists, as a rule, of Arabic inscriptions that are manipulated into geometrical patterns wrought into arabesques. Painted tiles are largely used as panelling for the walls.[4] The palace complex is designed in the Mudéjar style, which is characteristic of western elements reinterpreted into Islamic forms and widely popular during the Reconquista, the reconquest of the Iberian Peninsula from the Muslims by the Christian kingdoms. 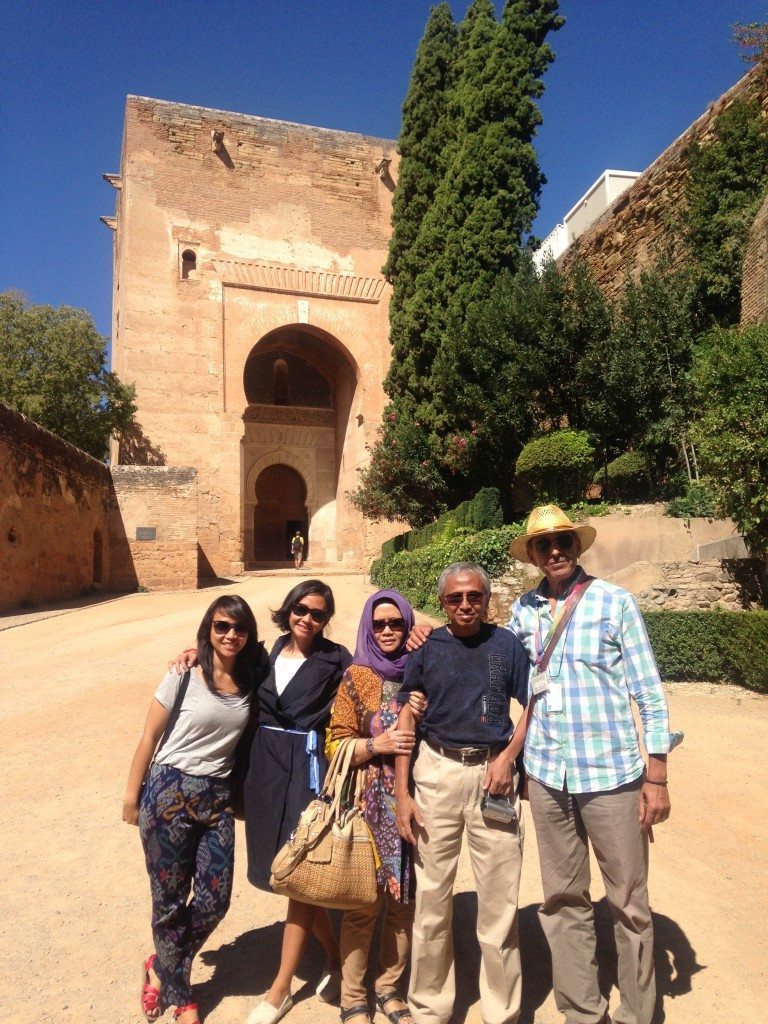 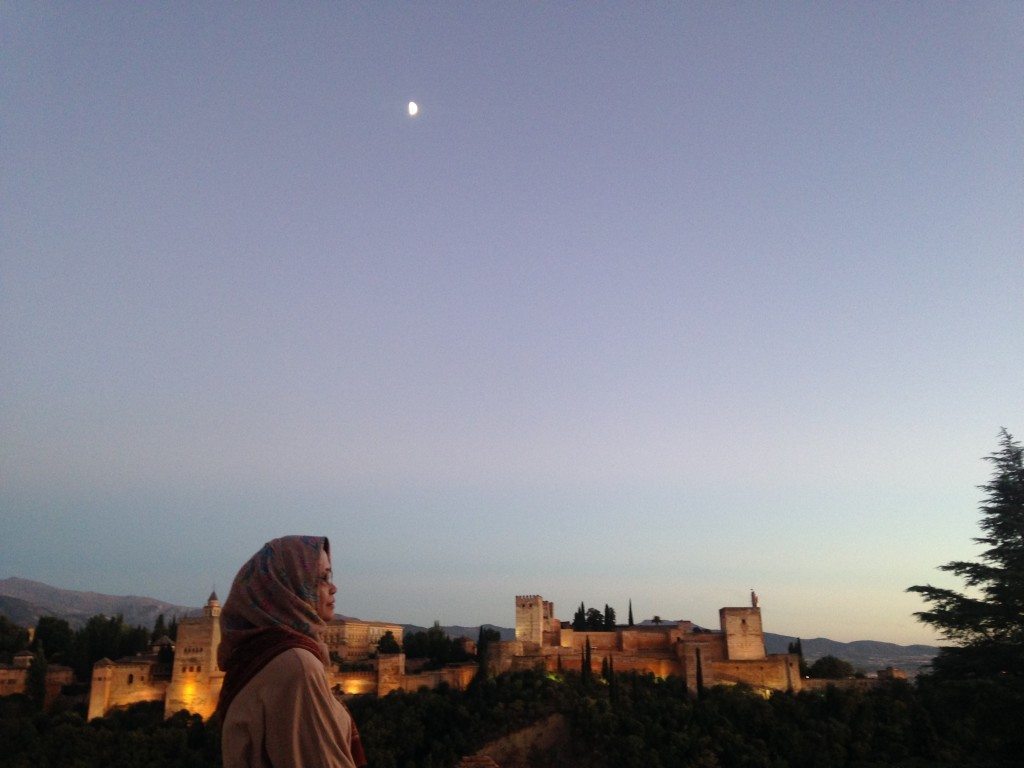 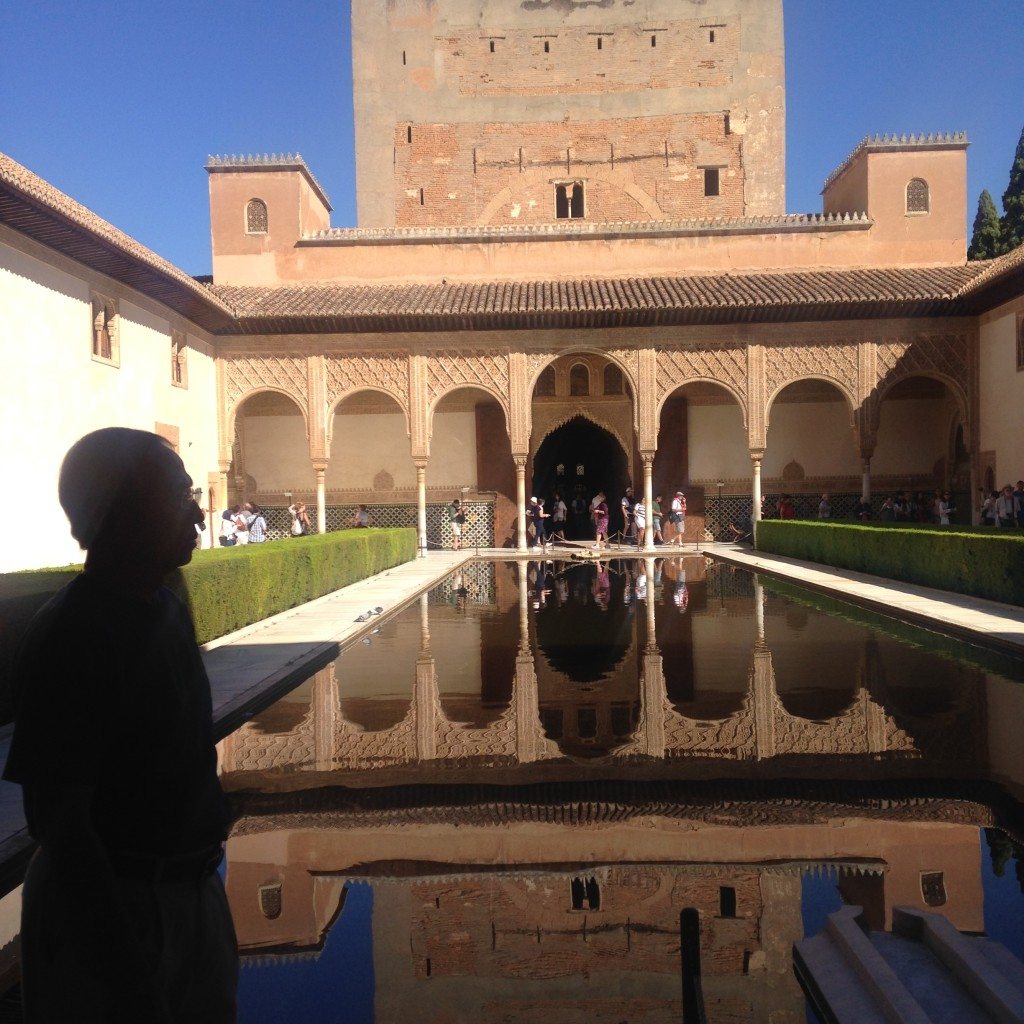 Another highlight of that day, WE FINALLY FOUND FLAMENCO PERFORMANCE anddd for free!!! I trusted on my guts!

Day 6 – Orgiva – Alpujjara Mountain – Slobrenia – Malaga
Sacrifice day! We were lucky we could celebrate it here, in a total different environment. Yasin kindly promised to bring us to pray and celebrate eid in his village. I was so excited to see another culture of sacrificing day as well as to meet new people. I did not really know what to expect, yet turned out it was a small remote village. The people were super warm and welcoming. My dad and I used to watch a Canadian Serie called ‘The little mosque in the prairie‘ and it’s a total reality life in front of me.  Everybody knows everybody. I met a woman, which apparently a SWEDISH. I was a little surprised wondering what she was doing in that small village. It is not a place that random people would prefer to stop and stay. We had a little conversation, this woman moved there because she achieves peace, she feels the love around her, so she wants to have another form of life surrounded by those local people. I saluted her, it is a brave decision.
After praying, we went to another village that looks like Greece with the white houses. A village that’s never been changed since first was built hundred years ago. Furthermore continue to eat fish in the beach side of the mountain. It’s another city called Slobrenia, not so many people go here except locals. So it was peacefully quite during our visit. 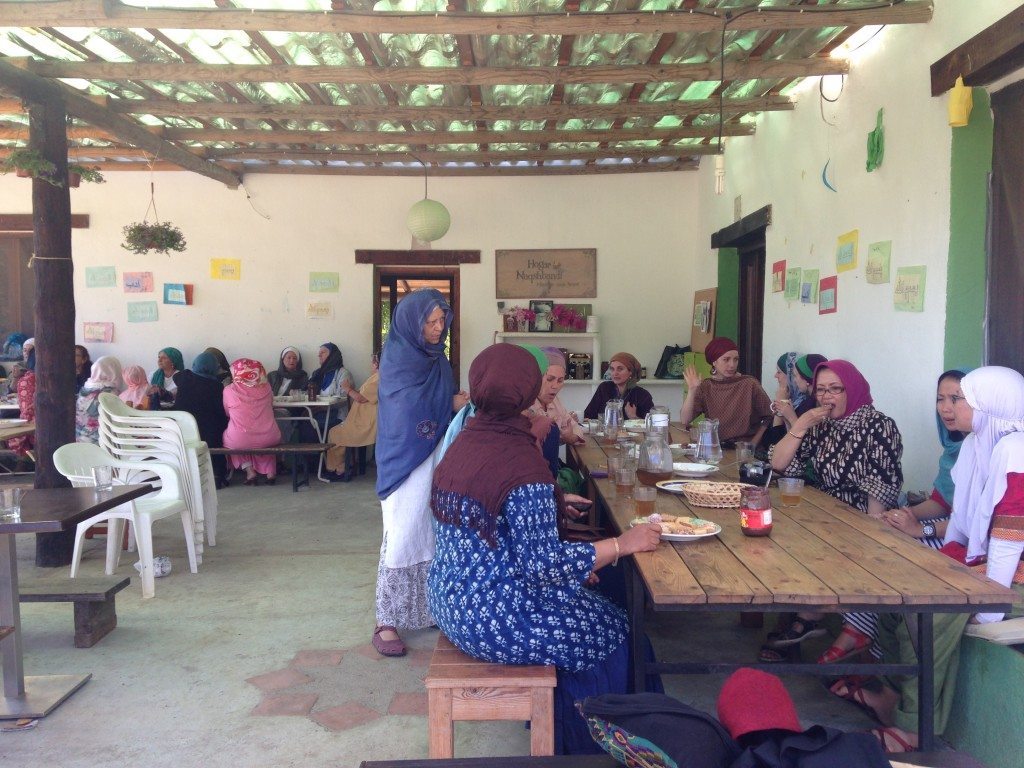 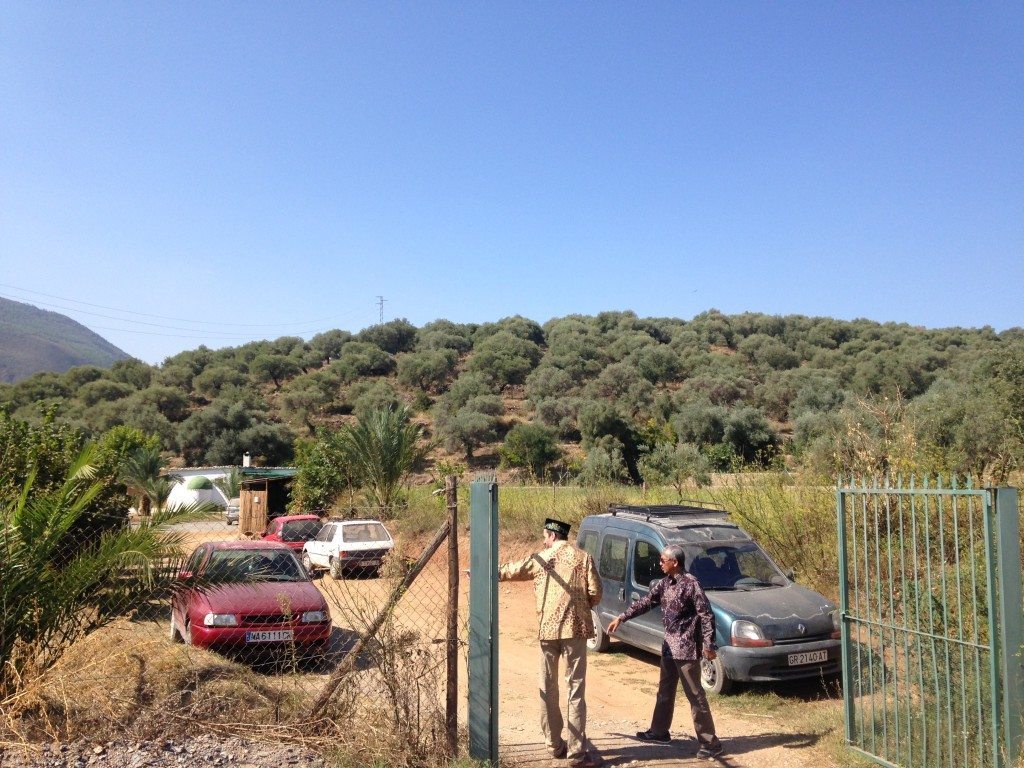 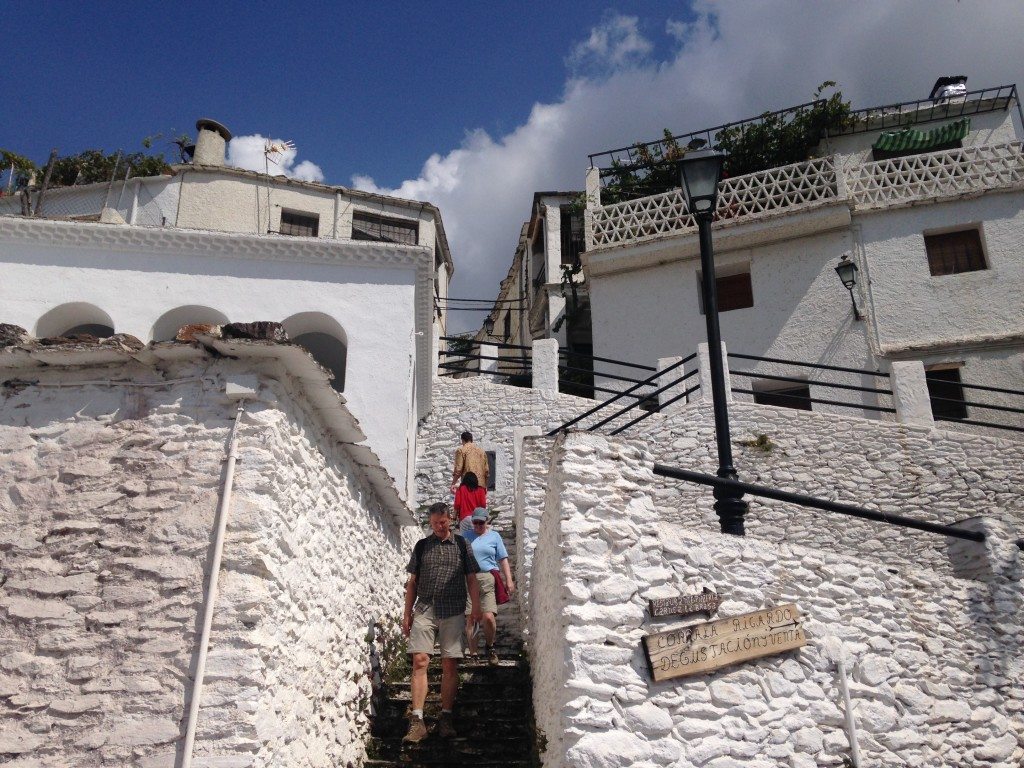 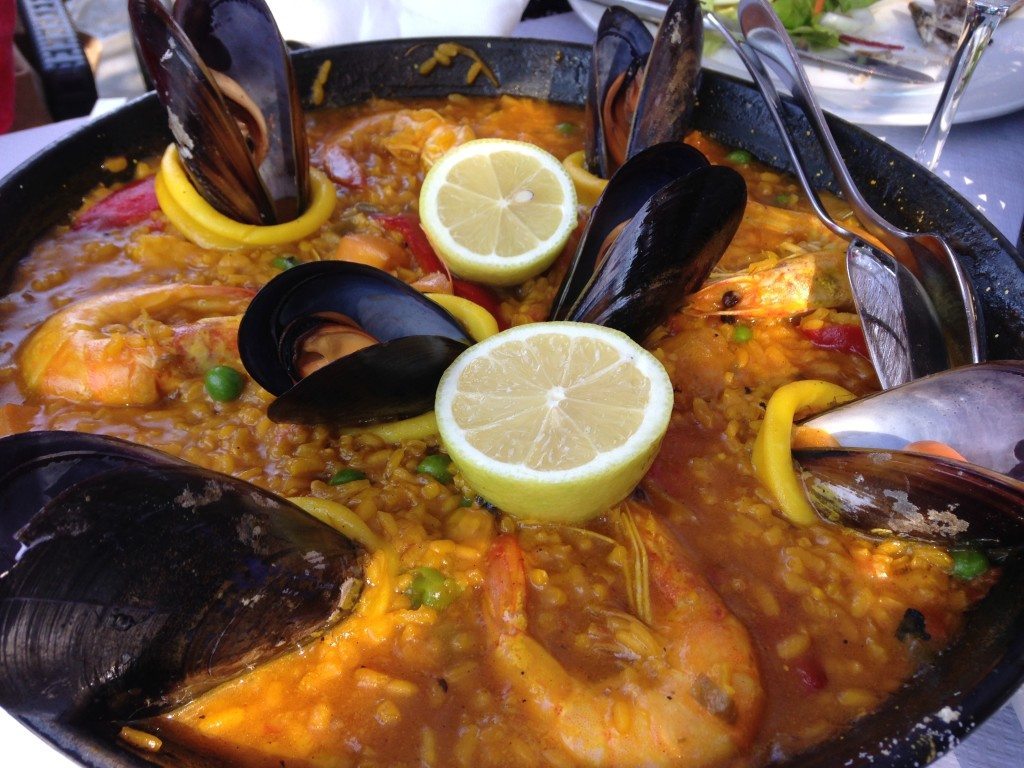 At 4pm, Yasin dropped us off in Malaga, our last stop in this trip. It’s sad that it comes the time to say goodbye to him. Not only that we will miss his smiles and stories, but also his capability of Spanish since no one speaks english properly in South of Spain hehe.

After arriving, we just went to the beach in the evening, had home-cooked meal for dinner, and took a good rest for the next day.

Day 7 – Malaga – Alcazaba and beach day
Malaga is a port city, very modern and surrounded by oceans. However, it still has some leftovers from the old Moorish times like some follows. 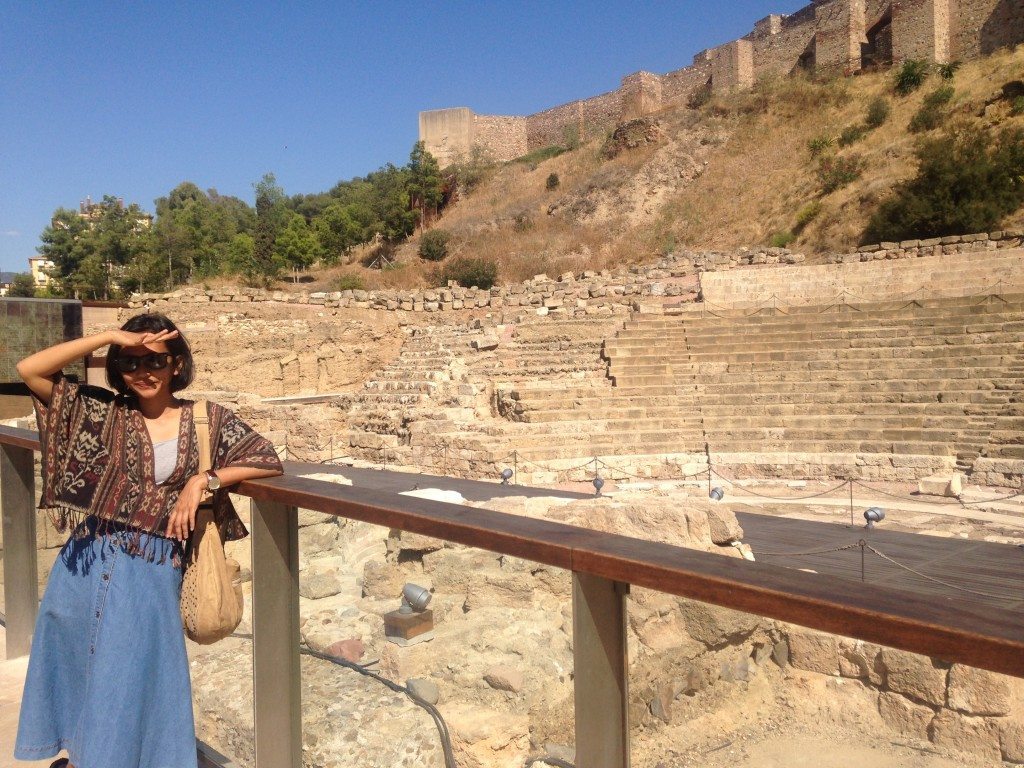 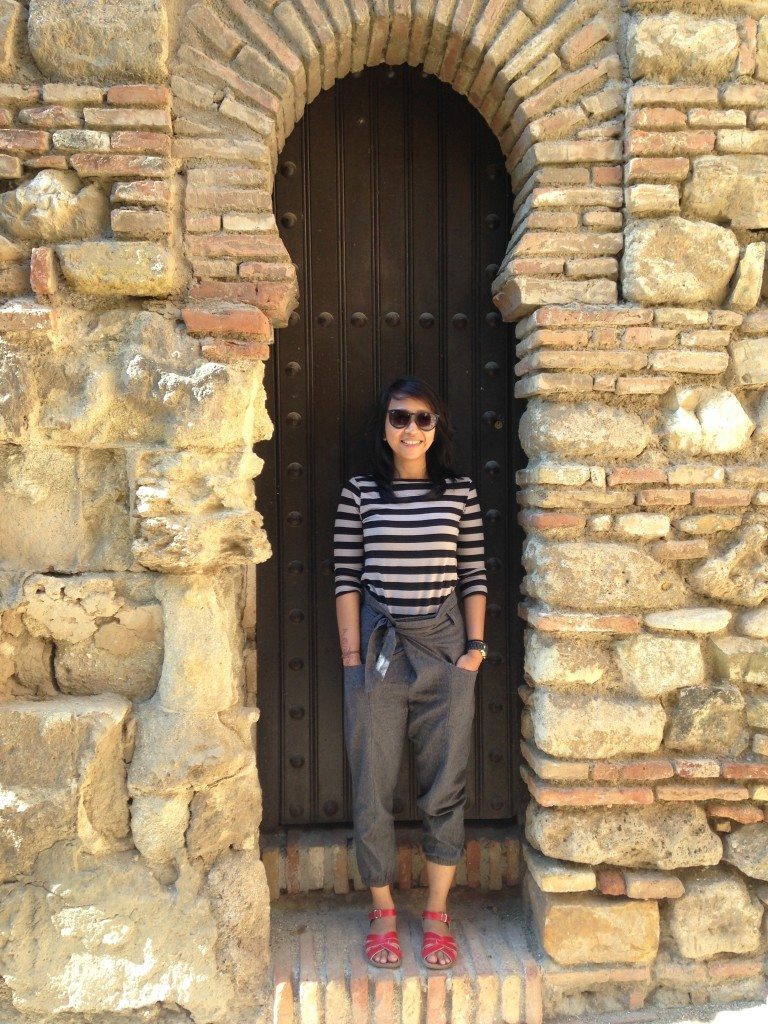 Total journey was a rip off to my pocket, but it is all worth it! Time to say see you later to this beautiful lowland with its histories. ¡Hasta luego! 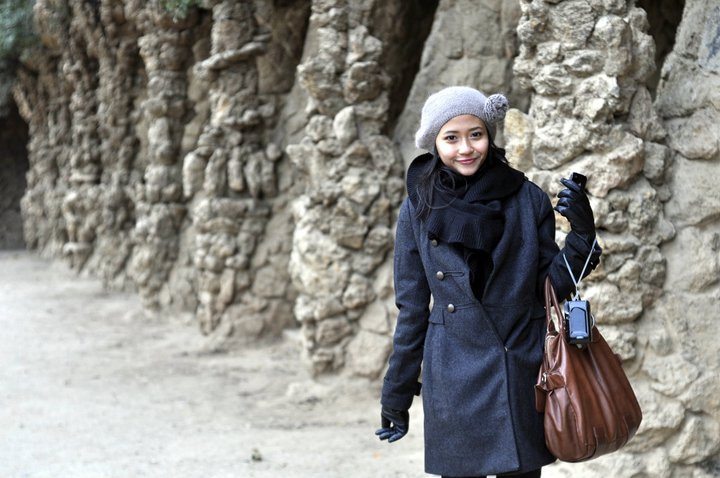 What we visited (Must-see place in Barca!)

Keep in your mind ! 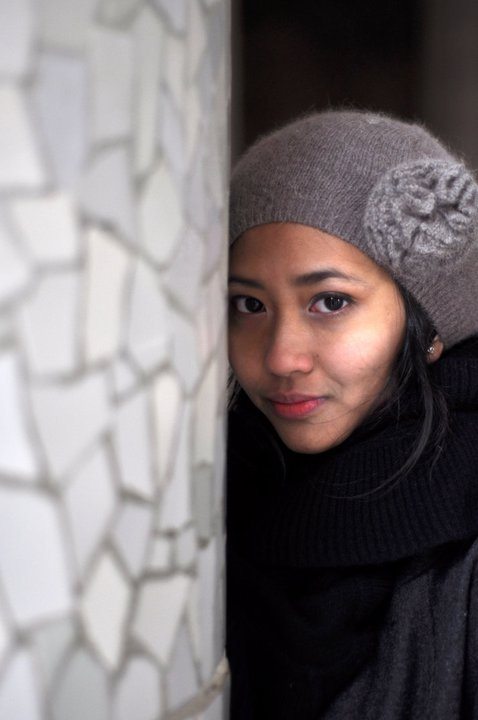 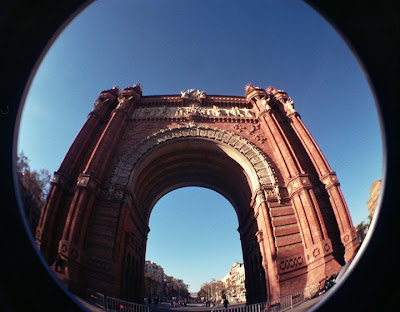 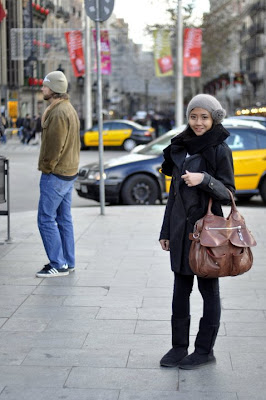 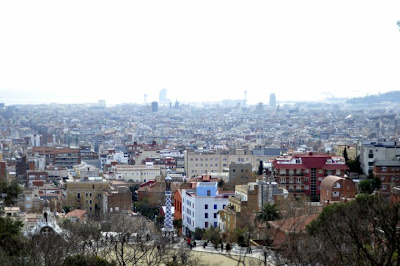 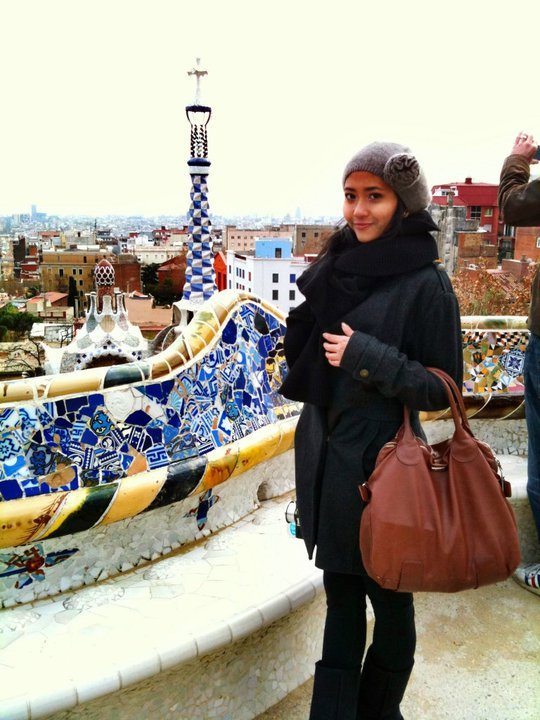 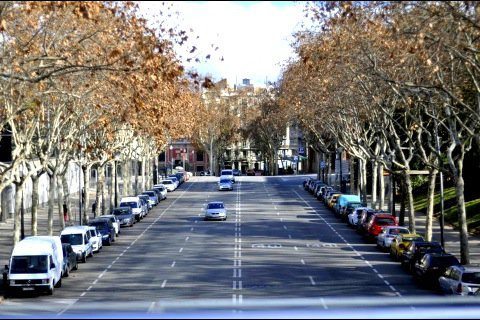