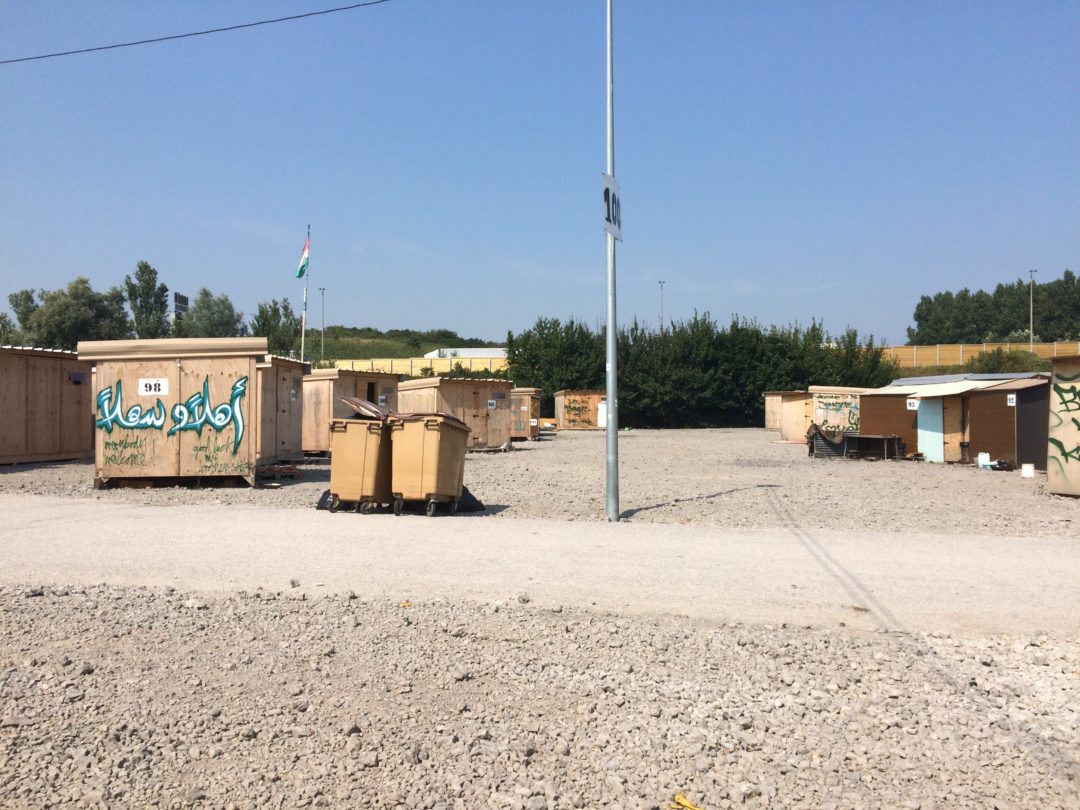 I snuggled with Damar just 15 minutes before I wrote this post, I was very upset taking a closer look to the news of Calais strike today (after I received an email chain from TOMS carrier about the possibility of delayed goods due to the strike – says a person who works in a supply chain department :)). Freight drivers blockaded the main road leading to the port of Calais demanding French authorities to shut down a refugee camp or the ‘Jungle’. Drivers want to force the government to address what they say are increasingly violent roadside attacks and rising human and economic costs associated with stowaways trying to get to the U.K.

I was sad because I know I cannot do anything to make the situation any better. I cannot even picture the feeling of those cornered refugees. There might be some people who do some harms to other people, but the majority of them do not do it. All of them have nowhere to go and they certainly do not choose to be in this position. Calais has more than 2500 refugees who want to get the asylum to the UK, for the sake of having peace and to create a better life. Seems like they do not acknowledge what has been going on in the UK recently. But who can blame them, they do not want so much, they just want to live a normal life with open opportunities.

Anyway speaking of which, on the 26-28 of August, I was lucky and humbled to be able to get the chance to visit the refugee camp, not in Calais, but in Grand Synthe, also in the Northern part of France. Having witnessed it, Grand Synthe is relatively in much better condition than Calais. I was there in the occasion of TOMS’ Tomorrow’s Project. One of my TOMS colleague, Marie, who is French, and other 9 French women initiated a program called Le Recho (REfuge. CHaleur. Optimisme). This program is in the culinary area and the aim is to provide healthy food with full of nutrition. Most likely the food provided in such camp are fulfilling in terms quantity (such as rice, noodles, pasta piece of meat, small amount of veggies), but not quality.

Nutrition is actually plays a very important role to combat depression in which could trigger sickness more easily. There is a monthly budget allocation from TOMS to any project that its employees have, and by the by it does not have to be a project from the employee directly but could also be a project from friends/family in your surrounding. I personally felt very privileged to have this kind of opportunity because as I know there are a lot of people who are willing to help and/or donate but does not have an easy access to. For me, this was just simply coming to my way.

I went with 5 other people consist with 2 Indonesian Women, 1 French Man, 1 French Woman, and 1 Dutch Man. We rented the car ourselves at Sixt in Amsterdam. We took half day from the office off (paid and not counted as a day off due to the voluntary activity – such a blessing!). It was Friday thus my manager did not mind at all for me to leave after lunch. We gathered at the rental car place and started driving from there. We were all a little bit anxious because of the safety that other colleagues, who was there a week before, have warned us prior the departure. I could have been bailed but I decided not to, I guess because as said earlier, this is such an opportunity to experience. I re-winded why I ended up where I am now. I wanted to do something more meaningful and close to feel more fulfilling by what I do everyday even though the impact might be small. And when what I do everyday gets me nearly to the extra philanthropist activity, I would not say No.

It took around 4-5 hours from point A to B. We arrived at 19.00 in Grand Synthe and went straight to the camp just to check in and have a quick look around. I was nervous because I did not know what or who I would encounter. When I entered the camp, I remember what they all said to not look at people’s face/eyes especially another gender for too long, do not take pictures, do not make that much noises, do not wear over exposed clothes. I did everything except looking at people’s eyes/face. I guess I would feel respected when people greet and look me in the face/eye. I believe, in this situation, smile does not do any harm but warming, the eyes tell that there are other people care about their beings.

There were a lot of guys, wait, to be honest, I only saw Men. Most women were asked by their spouse or family to stay inside the house. Some households can be very lucky to have stoves inside to cook. Those are sold around there, and only people with money can buy that kind of luxury. After the entrance, there was a power charge station where the guys used for charging, hangout, simply chat with others, or just to be alone, there was a small table where some refugees sold several items (food, tissues, snacks, etc), there was a small barbershop in the corner, and there is also a hotdog/snack place nearby. Grand Synthe refugee camp depends on the food 100% to the donations. Any food there is free expect the one that is run by refugees.

That 1st day went by so quickly. We were warned to be out from the camp before it got dark, because the darkness brings all the insecurity within. Those are the times when the smugglers do their job. By smugglers, I mean people who get refugees from the war countries in to France. These people also come from war countries, but they slightly are more lucky in terms of financial and sly in terms of using that privilege. They demand those refugees to pay a fortune to get them out of the country. Back in the past couple of months, they have to have 5000-8000 euro per person to get in to the boat with no guarantee they will arrive safe and sound. Nowadays, it is around 10000 euro. Those refugees are rather educated and rich in their home country, I cannot image what about other unfortunate people who do not have that amount of money in their saving. 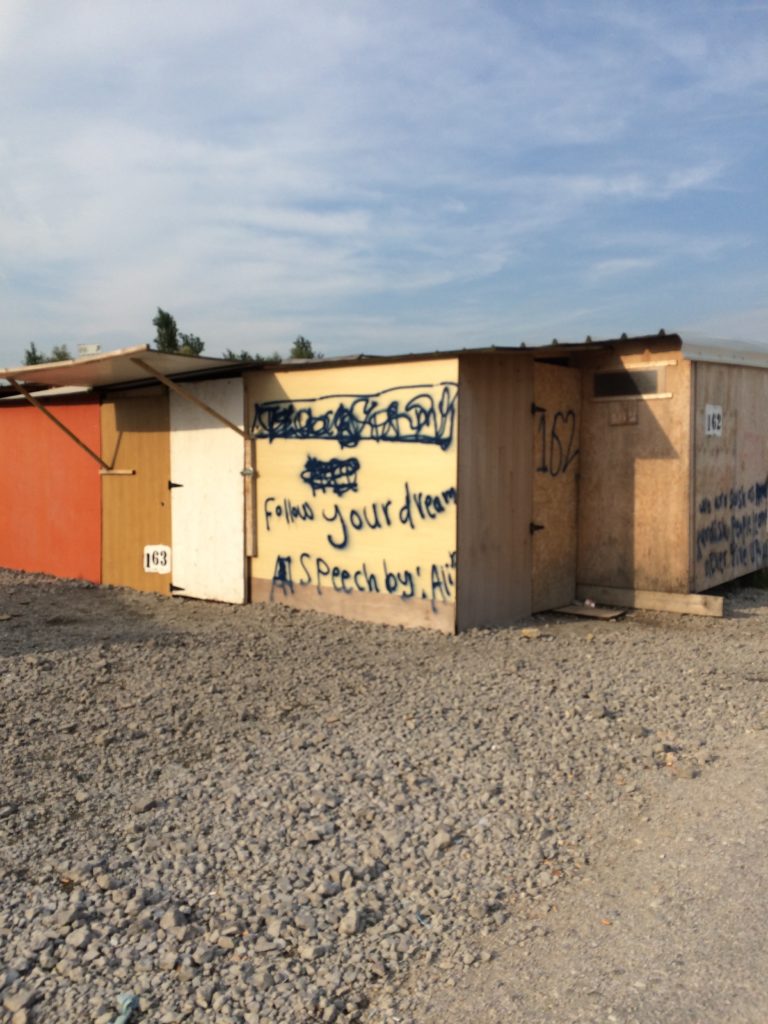 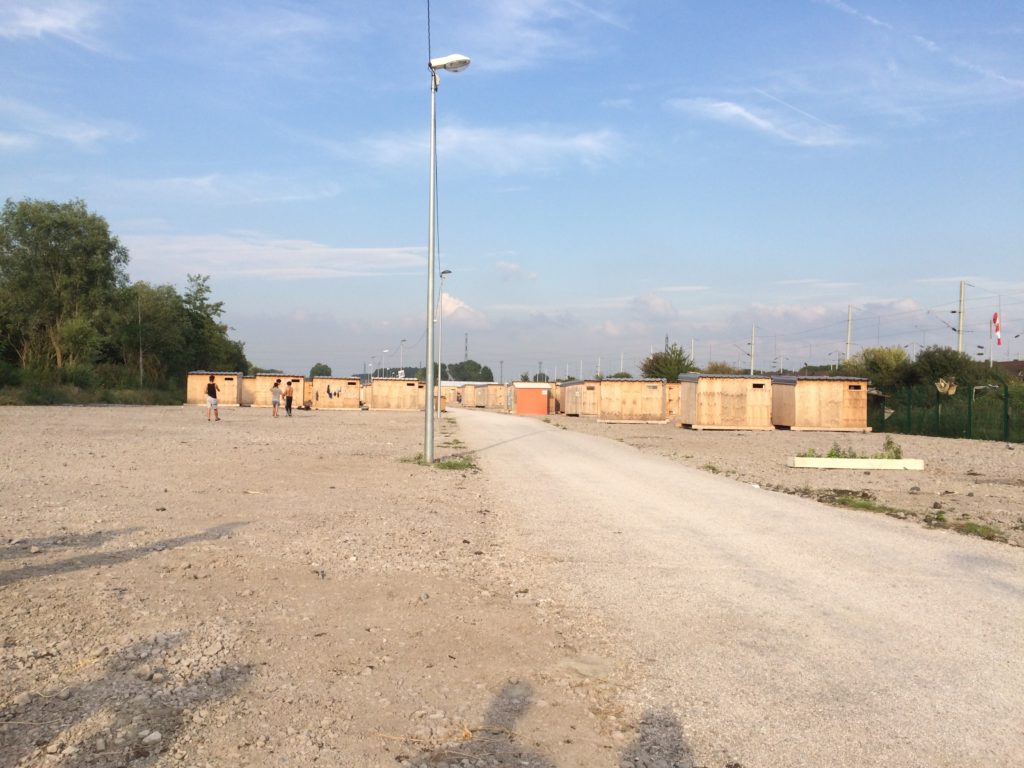 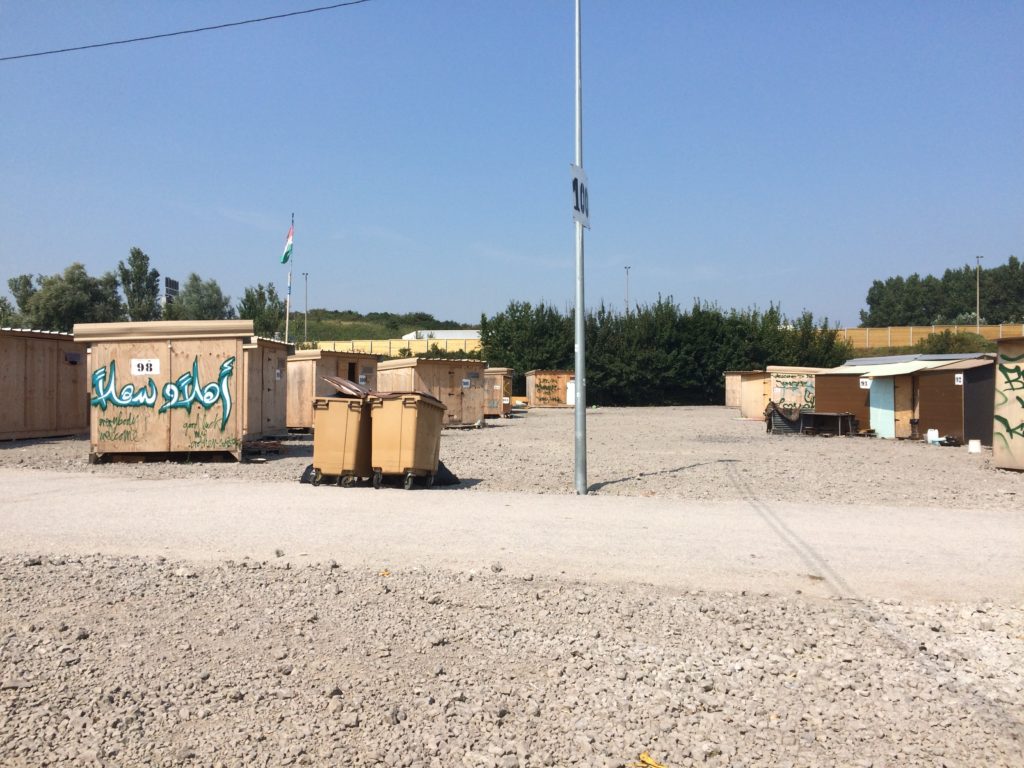 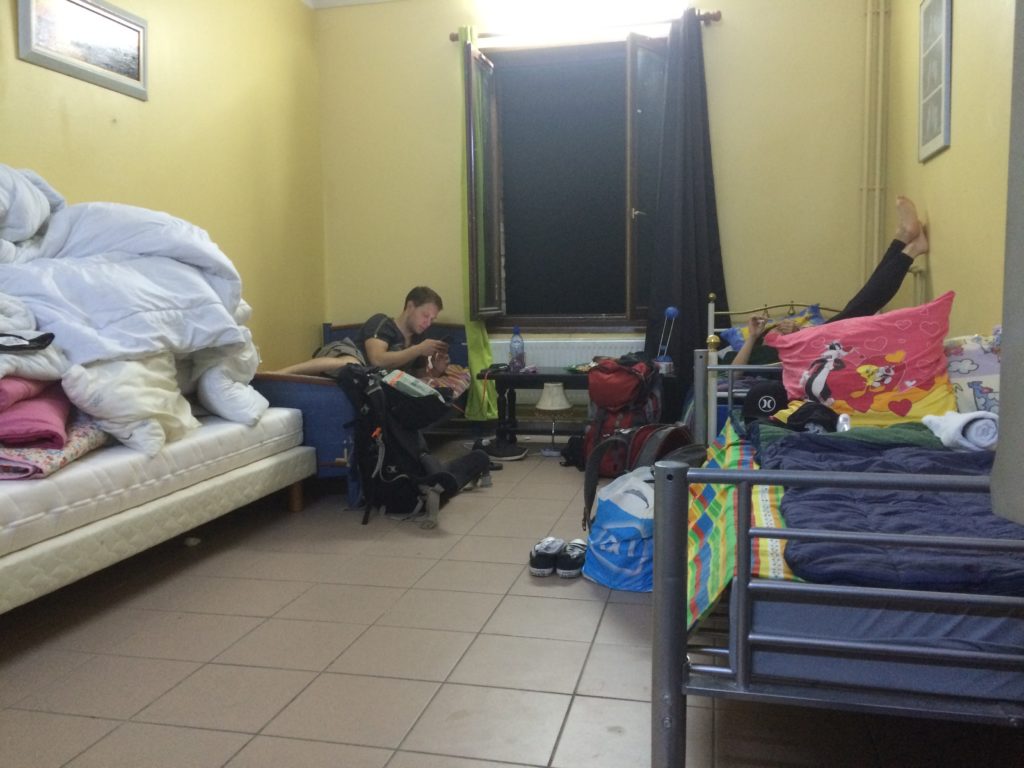 Our stay 🙂 More than perfect. We felt very safe.

It was a hard day….. I could not loosen up thinking how fortunate and how grateful I am born in a safe country with a family who love me whole-heartedly and now live in so much developed country where thousand of opportunities open. I just have sooooo much uncountable options.

The 2nd day started at 08.00. We stopped for a quick breakfast in the Brasserie nearby our stay and we drove straight to the kitchen. The kitchen was not inside the refugee camp as there was already people who run the kitchen there, who is the refugee themselves. We wanted to avoid any conflict possible, hence the rented kitchen. The kitchen was at the back of a theatre. I am not sure whether it was rented or donated, but surely the mayor is there everyday and help preparing the food. He is very warm-hearted and earned so much respect. He was the one who fought the government to create a proper neighborhood for refugees. It looked horrible, muddy, vulnerable back then, now much better (shown in the above pictures). 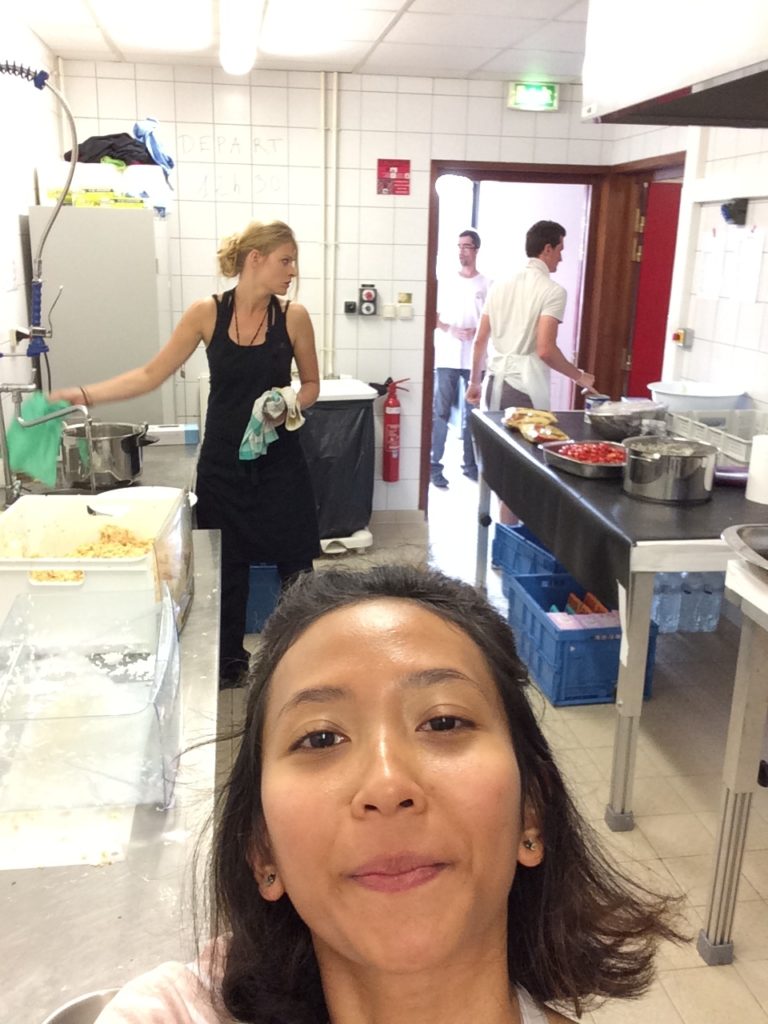 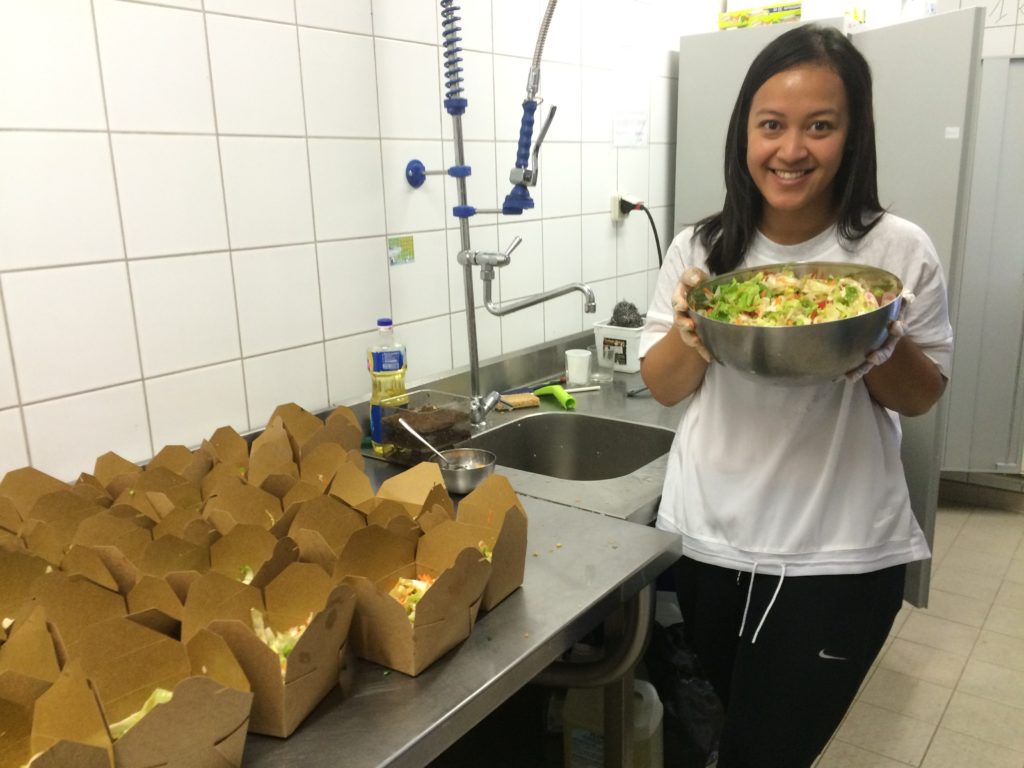 Sarita, the other Indonesian from TOMS 😉 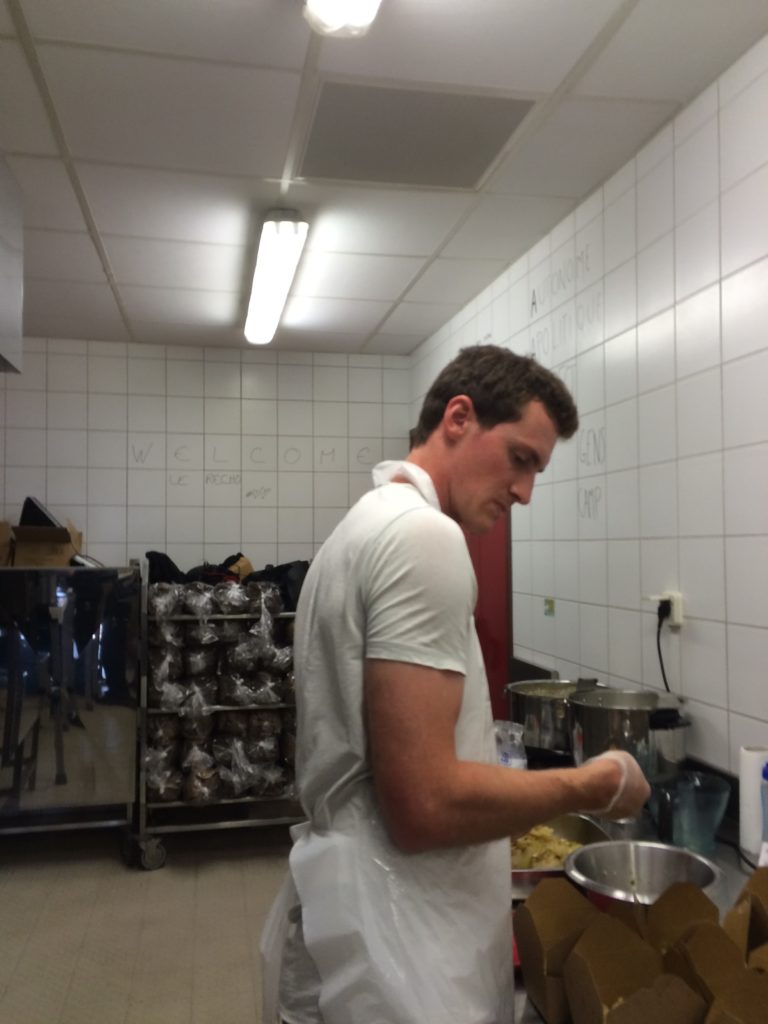 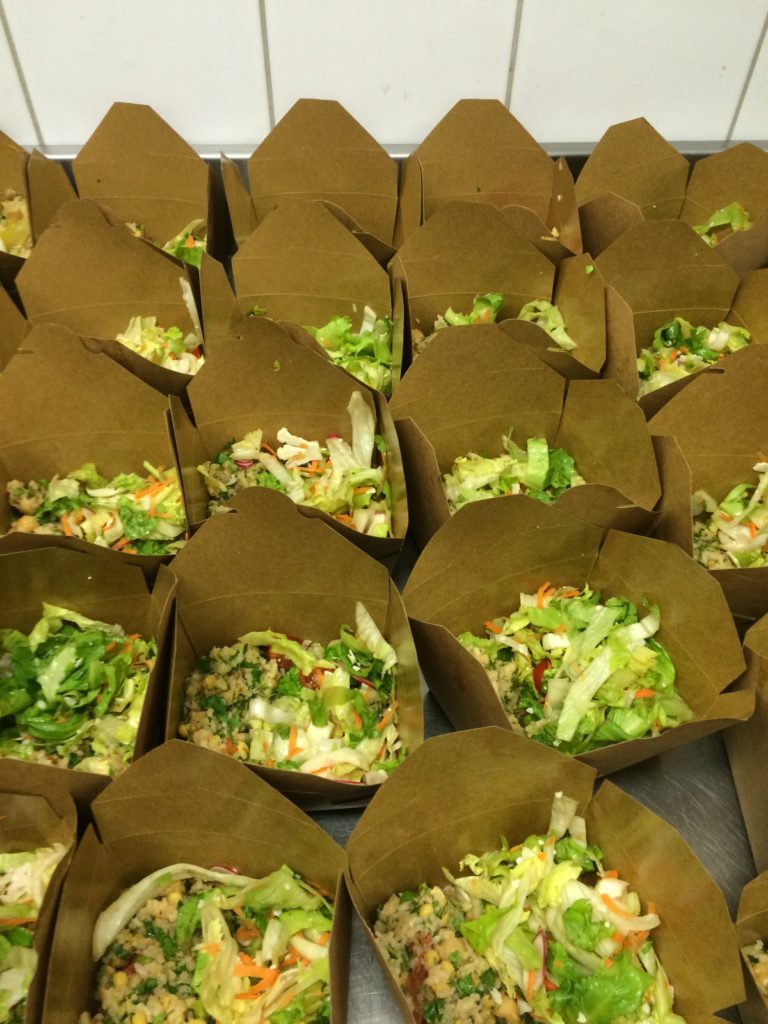 The food is all vegetarian – so much respect for the organizer! I was worried with the fact that most refugees are from Muslim country, that they would refuse non-halal food. But the doubt was answered clearly. We cooked until lunch time, the quality was undoubtedly high class. Especially because it was cooked with heart. Hopefully the love could be delivered through food. That day, the food was bulgur salad, sponge cake and banana. The hit was in the cake, it was finished in a split second, I guess because it was a luxury that they could not always get. They eat something to get through the day. We served the food and then ate together with all of them. And for the dinner, we cooked together with the refugees over there to involve them in the activity to avoid any power struggle. Because we did not want to dominate anyone, we were there to help. 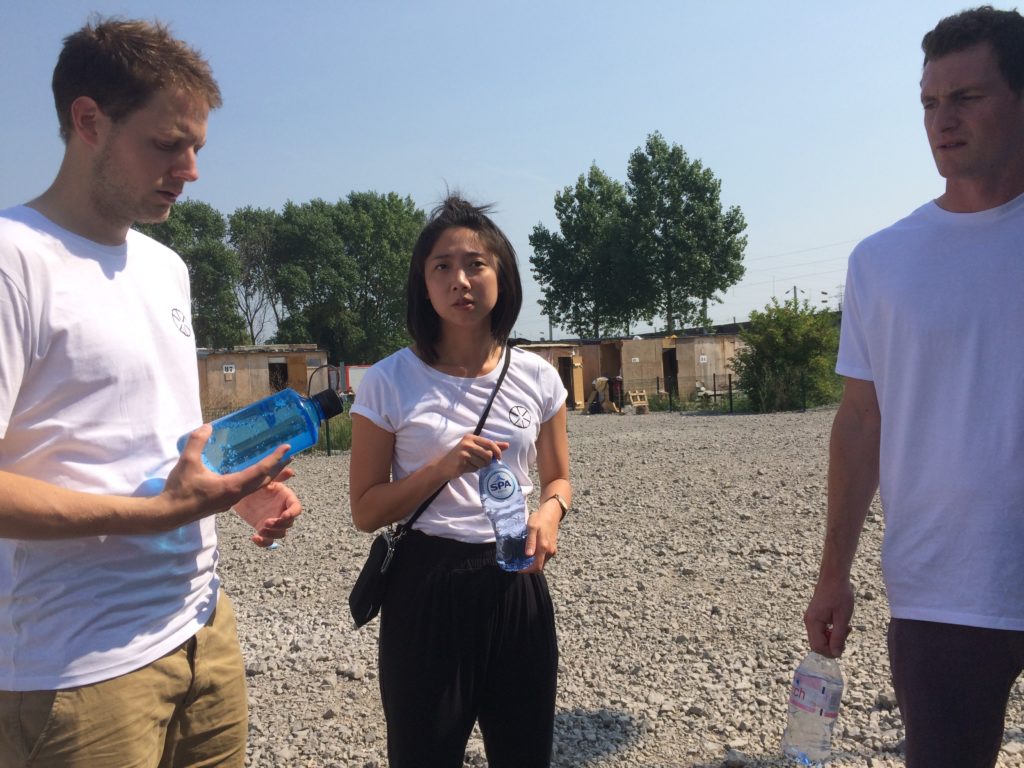 In between the time, we went to check out the women Centre. We brought some old kids clothes given by my colleagues’ friends to be donated to the women centre inside the camp. I checked on the wish list board, it filled with normal woman stuff, they need make up, tights, hair dye, literally, they do not want so much. I wish I had all the money in the world to bring all they want/need. 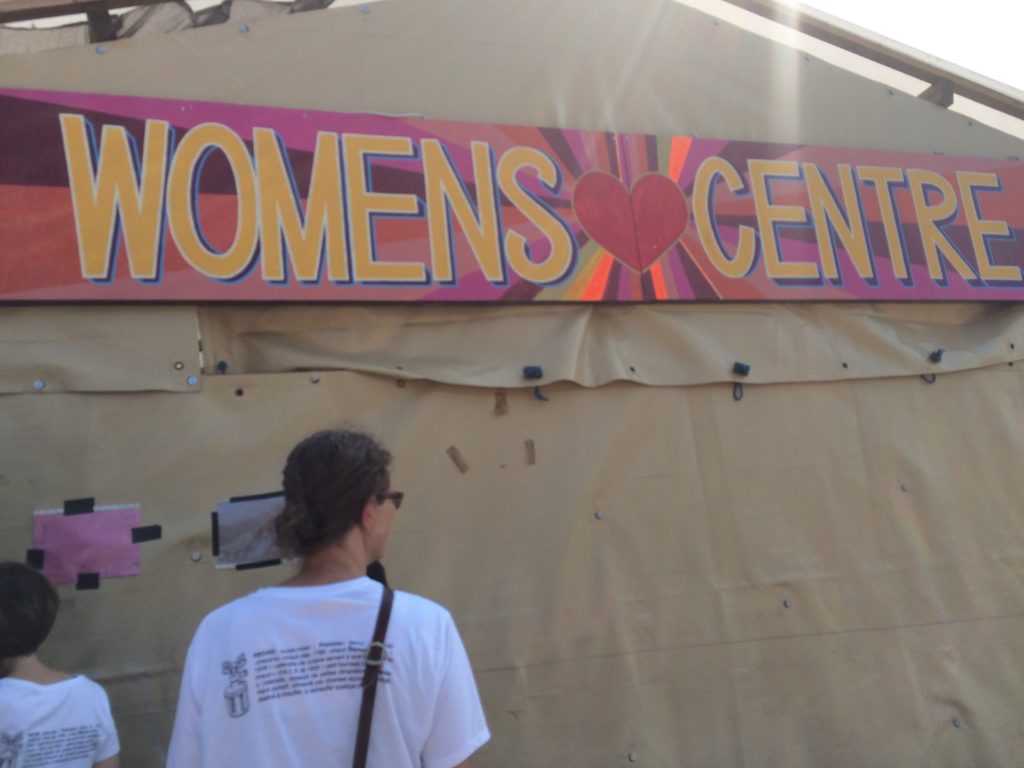 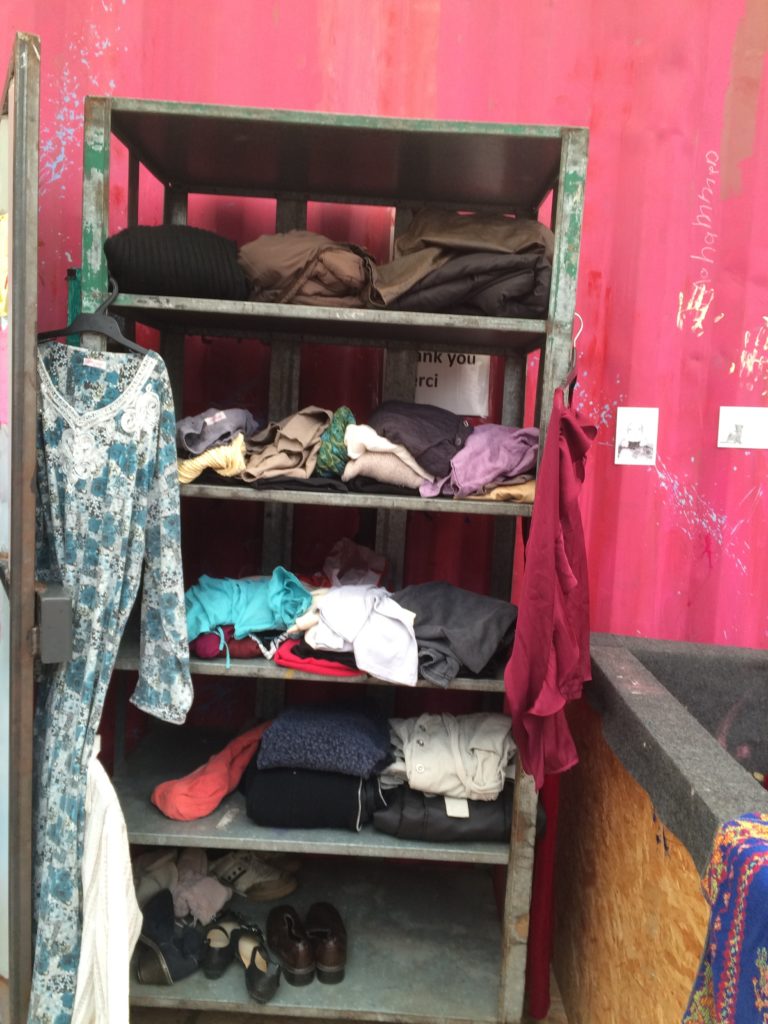 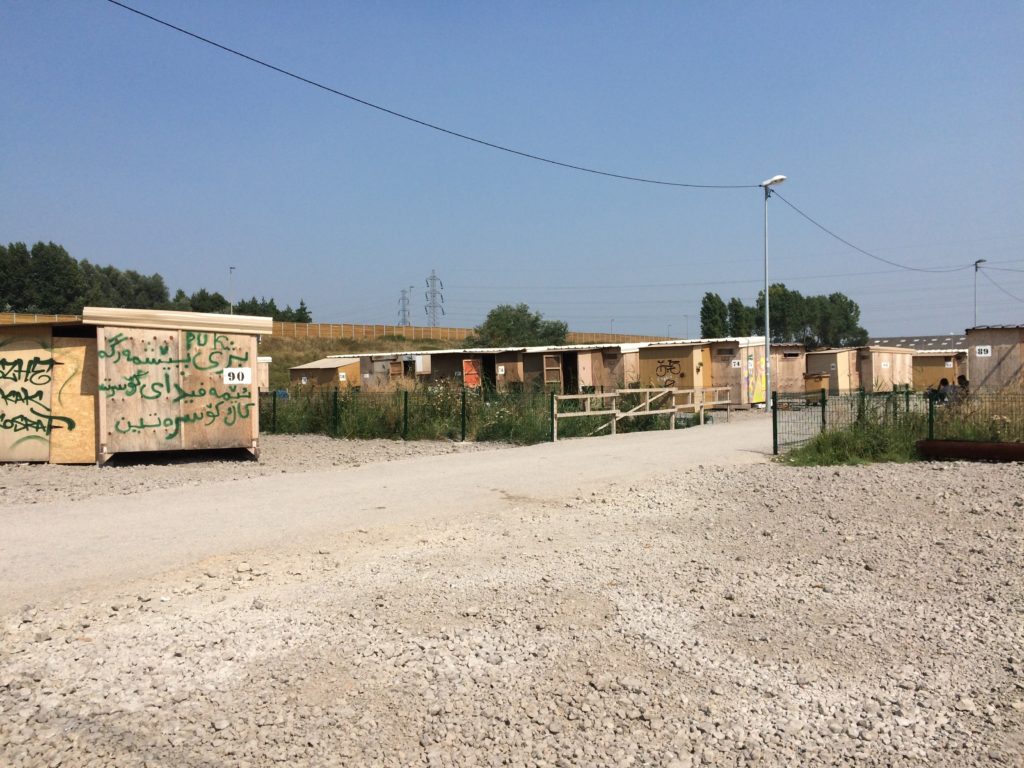 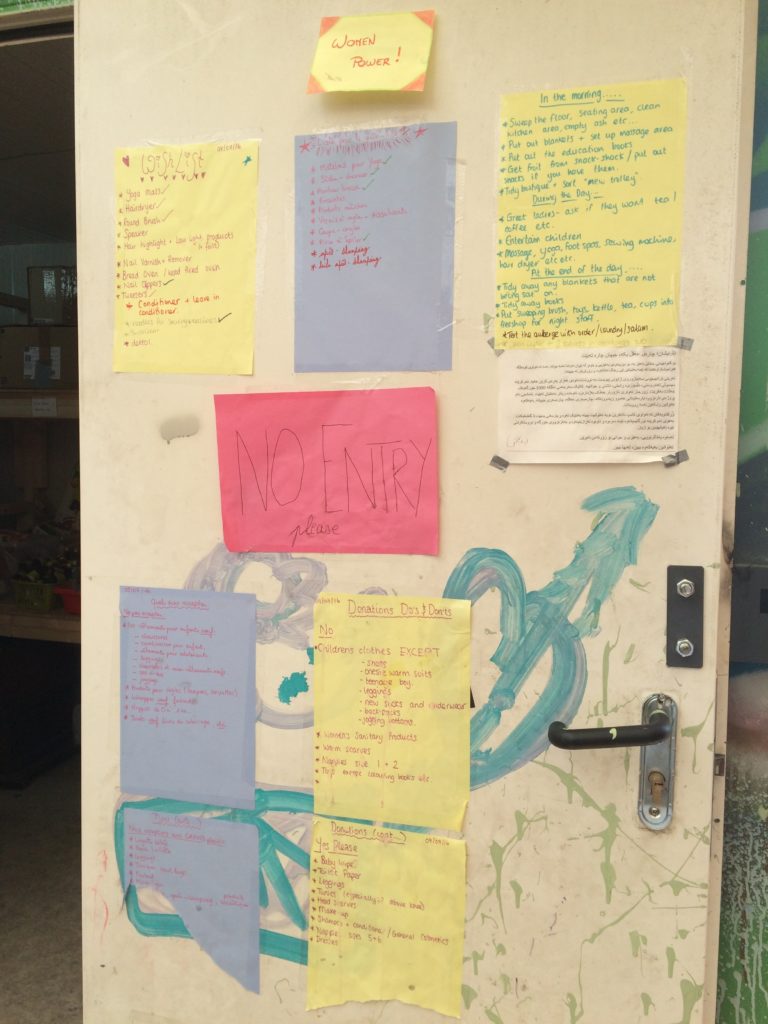 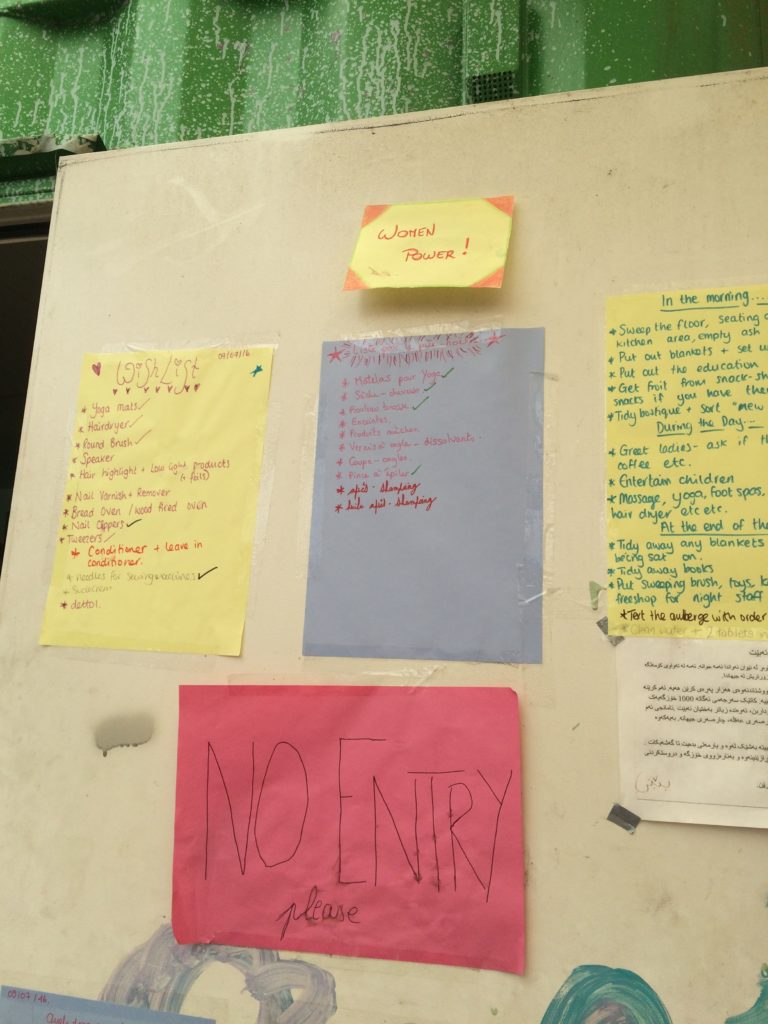 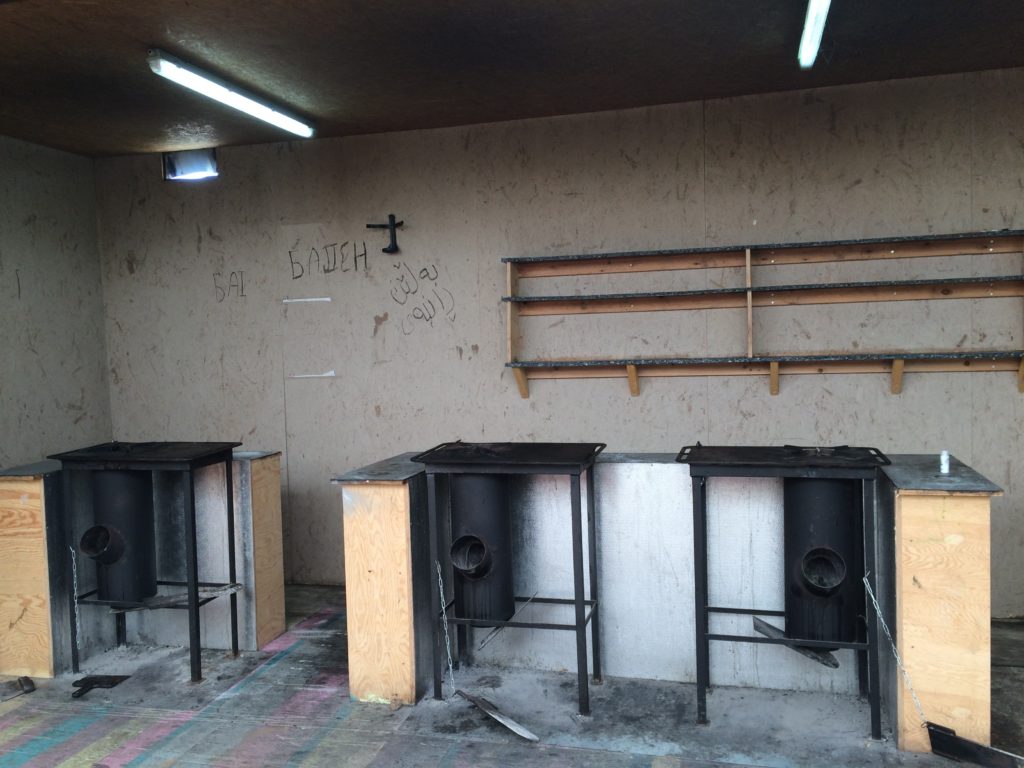 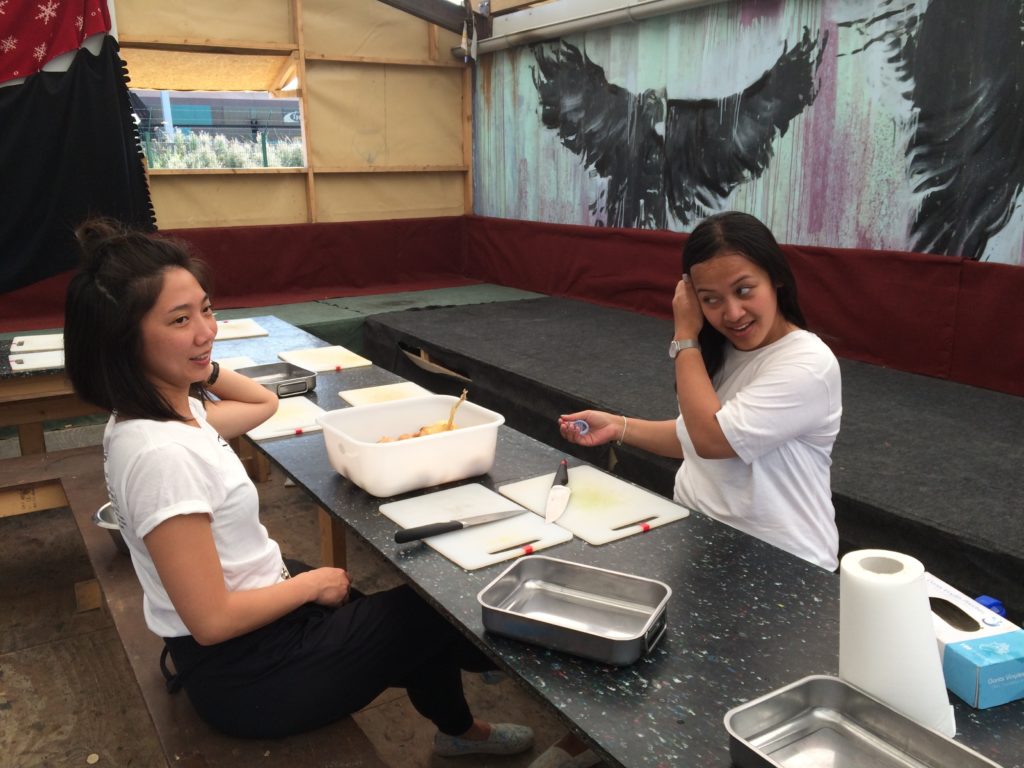 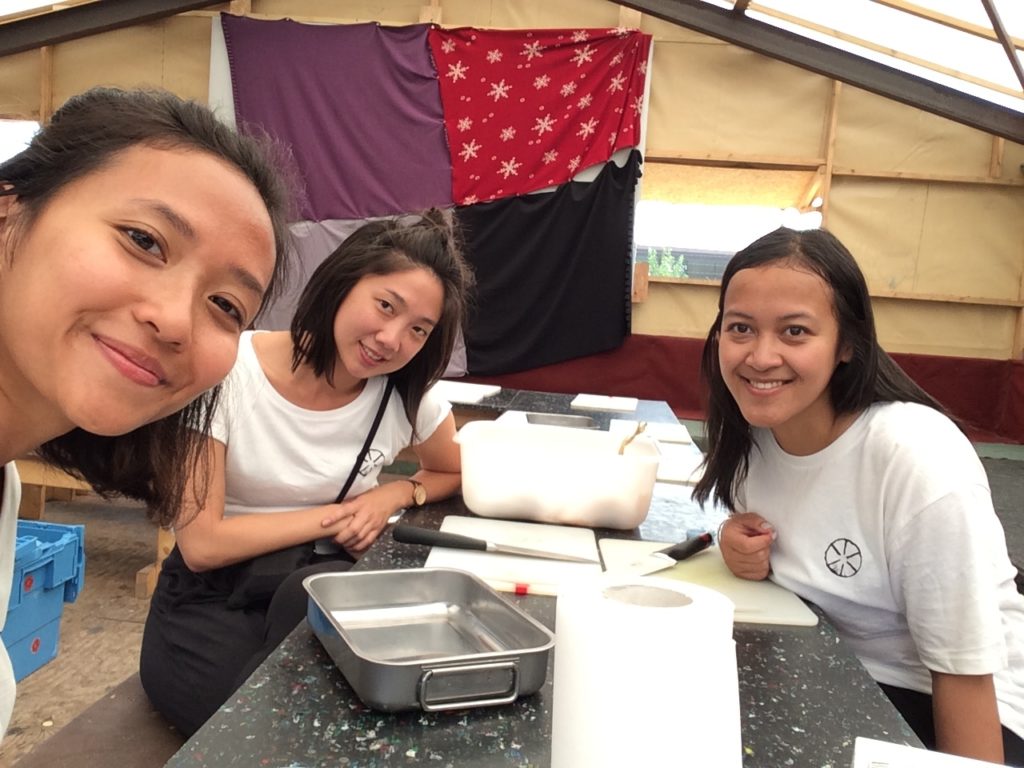 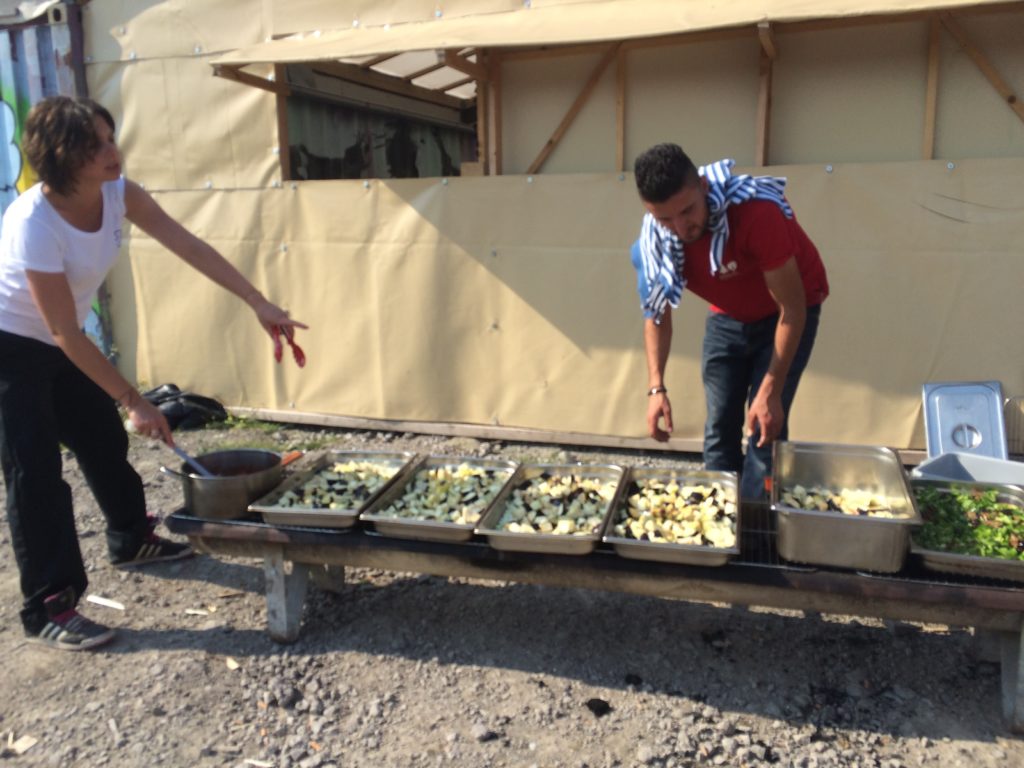 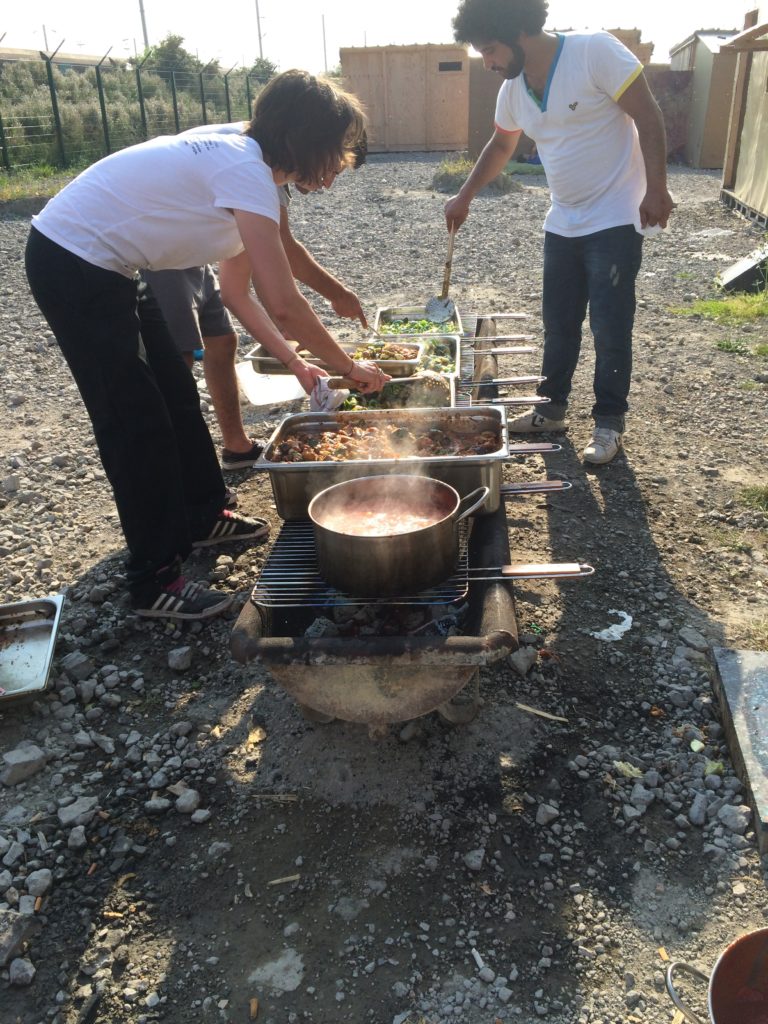 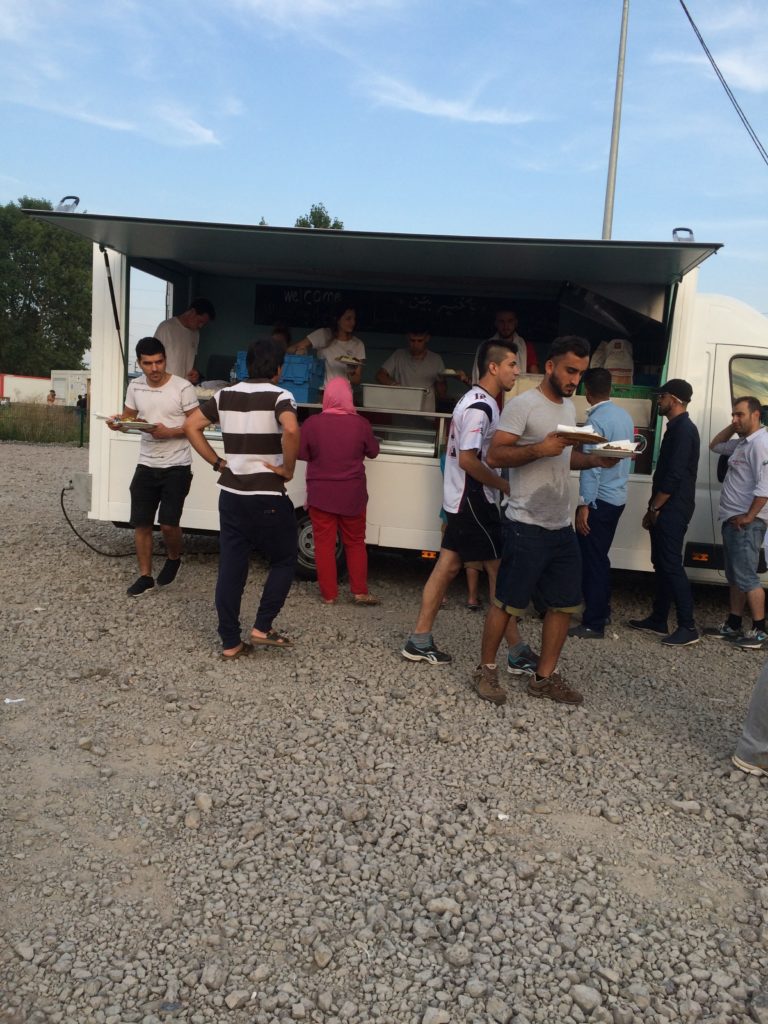 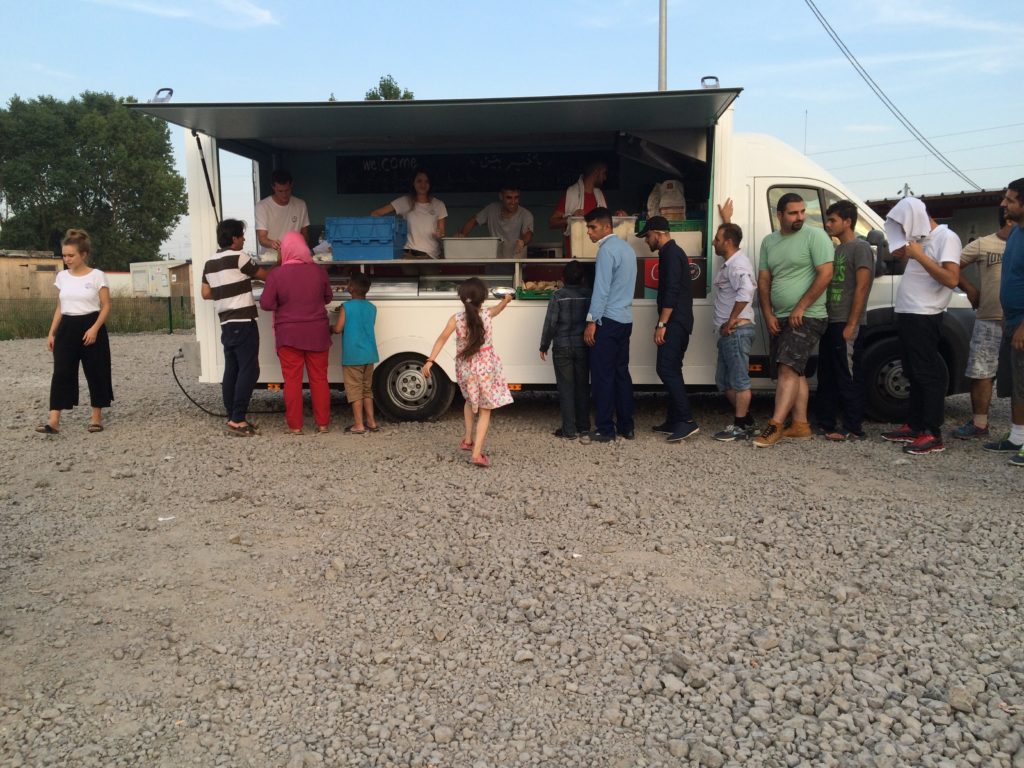 What I have learnt from the trip:

I am very glad to always be reminded again and again…. There is a reason for each human to be born in this world, one of those is to help one another.

Again, very much thankful for Le Recho and TOMS! 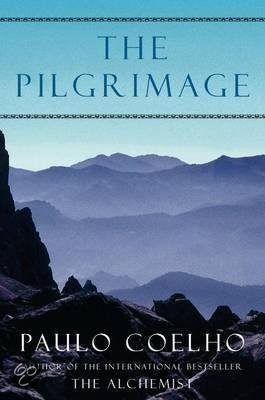 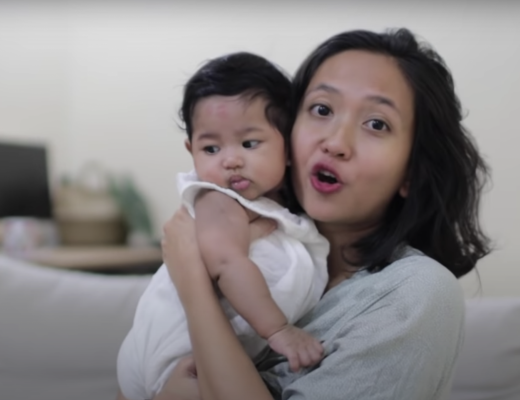 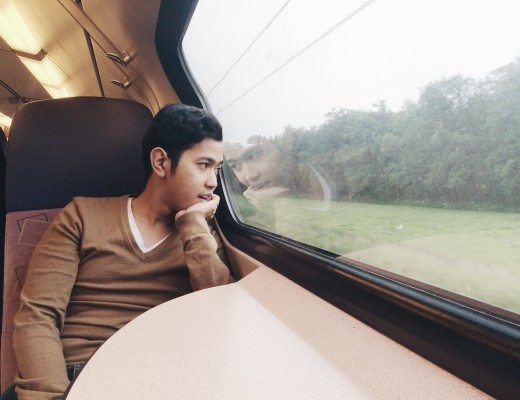